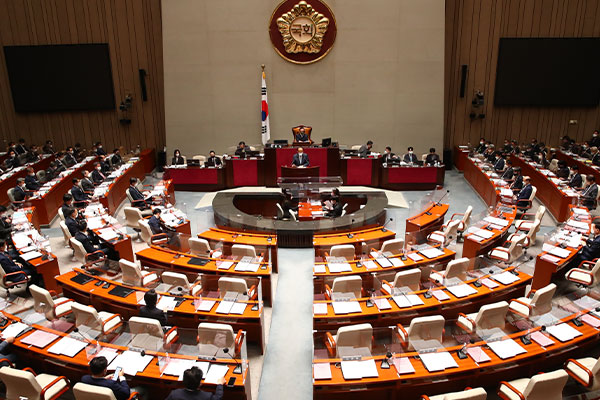 Amid a continued parliamentary gridlock, the floor leaders of rival parties will hold a closed session on Sunday to continue negotiations on how to share committee memberships.

The main opposition Democratic Party (DP) earlier said that it would convene a plenary parliamentary session on Monday afternoon to unilaterally elect a new National Assembly speaker unless it reaches an agreement over the weekend.

Ruling People Power Party (PPP) Floor Leader Kweon Seong-dong told reporters on Saturday that he would seek ways to reach an agreement in the planned negotiations, but his party remains unchanged in its position regarding key issues.

The DP takes the position that it would give up the chair post for the Legislation and Judiciary Committee if the ruling party agreed to take part in the special committee for prosecution reform and retract a competence dispute request it filed with the Constitutional Court.

The PPP rejected the DP's offer, saying that the DP had promised to give the chair post for the Legislation and Judiciary Committee last year, so it should not impose any conditions.
Share
Print
List