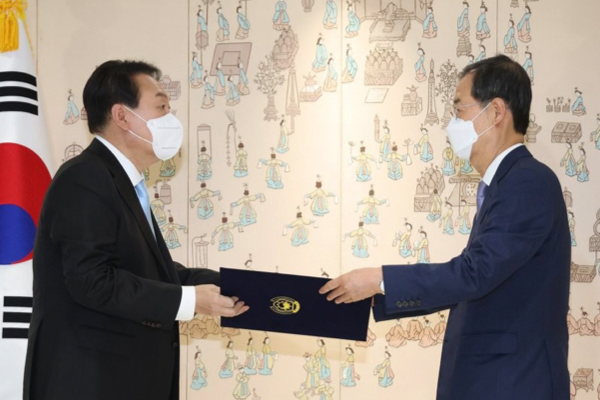 A presidential official said on Monday that Yoon and Han sat down for their first one-on-one meeting in three weeks following Yoon's return from the North Atlantic Treaty Organization(NATO) summit in Spain last week.

During the meeting, the second of its kind, the prime minister briefed the president on the government’s responses to economic issues such as inflation and household debt, as well as economic projects such as deregulation.

In response, Yoon said that the economy is currently in an emergency situation and cited rapid inflation as one such challenge. He said extraordinary efforts are needed to stabilize people's livelihoods, calling it a top priority in managing state affairs.

Yoon also said it was important to appropriately inform the public of the policies and projects pursued by the government, urging ministries to strengthen policy communication with the media.

He also asked the prime minister to arrange follow-up measures to his economic diplomacy on the sidelines of the NATO summit, including on exports of defense-related products and nuclear reactors.

The president also called on the prime minister to make his utmost efforts to foster human talents needed in the era of the fourth industrial revolution, emphasizing the nation’s future depends on the task.
Share
Print
List