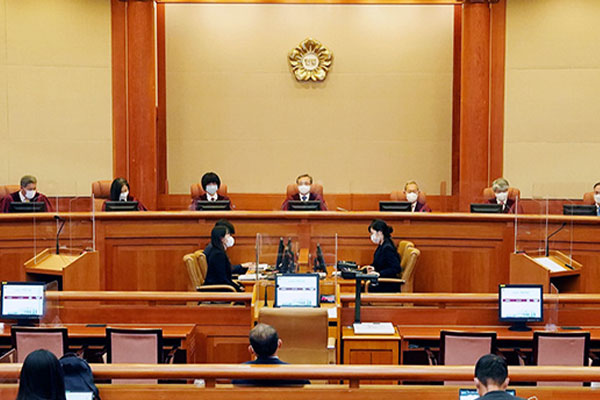 The hearing reviewed a petition filed by a person convicted of killing their parents in 2018. The convict filed the petition together with the justice and peace committee of the Catholic Bishops' Conference of Korea in February 2019 after the prosecution sought the death penalty. The convict is currently serving life in prison following a ruling by the Supreme Court.

The petitioner’s legal team said human life has absolute value that cannot be taken away by judicial review, and also argued that there is no clear evidence proving that capital punishment is more effective in deterring crime than other sentences.

The justice ministry, for its part, cautioned against underestimating the public interest served when a court hands down such judgement against a person who commits a grievous and heinous crime. The ministry said that serving the common good through crime prevention helps protect the lives of the innocent public.

South Korea has long been categorized as an "abolitionist in practice country,” as it has not carried out an execution for 25 years since late 1997, but capital punishment is still permissible by law.

Special bills to eliminate the death penalty were introduced in parliament nine times from the 15th to the 21st National Assembly but not one passed through the Legislation and Judiciary Committee.
Share
Print
List