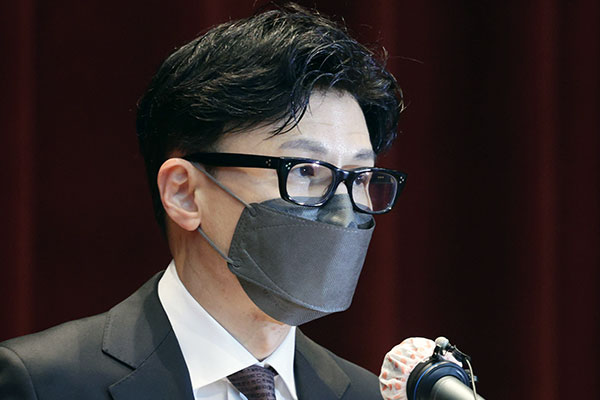 The former and current justice ministers clashed over the latter's allegedly outsized role in recruiting talent for the Yoon Suk Yeol administration.

During a parliamentary interpellation session on Monday, main opposition Democratic Party lawmaker Park Beom-kye, the former justice minister, called Han Dong-hoon, the current justice minister, a “king of kings,” referring to his position as the minister overseeing a new division tasked with vetting personnel for the Yoon government.

The division was launched under the justice ministry last month after President Yoon abolished the office of senior presidential secretary for civil affairs, which previously handled the vetting of candidates for high-level government posts.

Citing the constitutional principle prohibiting the comprehensive delegation of legislative authority to a particular administrative body, former minister Park questioned his successor for allegedly playing a major role in verifying the qualifications of nominees for the Supreme Court, the prime minister and senior presidential secretaries.

Han denied the allegations surrounding his roles but said the justice ministry being entrusted to play a role in presidential personnel management has been judged to be not problematic by the Ministry of Government Legislation.
Share
Print
List