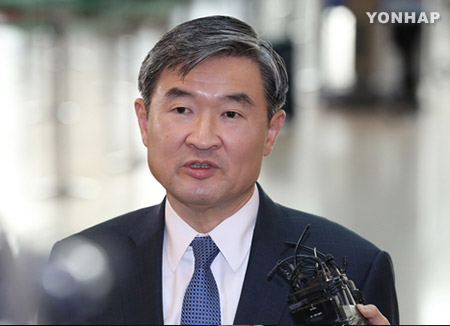 South Korea's Ambassador to the United States, Cho Tae-yong, said on Monday that the two nations will likely resume their strategic dialogue on extended deterrence in the near future.

The ambassador told reporters at the South Korean embassy that the activation of the bilateral dialogue, known as the Extended Deterrence Strategy and Consultation Group(EDSCG), is likely to come within the next two months.

Cho said that Seoul and Washington are cooperating and preparing for all possible contingencies amid the lingering possibility of a North Korean provocation as the North continues to reject dialogue with the international community.

The ambassador said South Korea and the U.S. have been making a great effort to realize the swift resumption of the EDSCG in light of the agreement reached between the leaders of the two nations.

He added that he believes the dialogue can be held within the next month or two thanks to the effort, sooner than expected by the U.S.
Share
Print
List