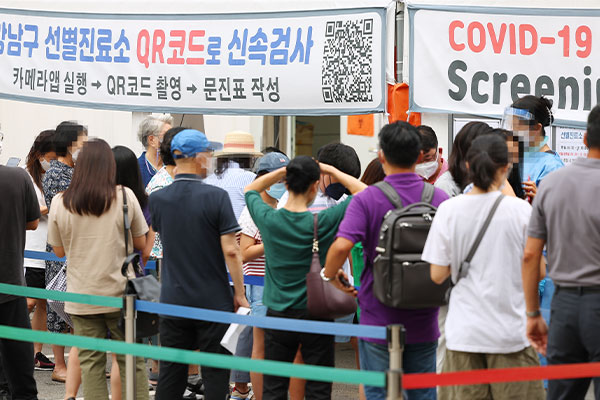 Health authorities said on Tuesday that the nation will likely see a continued rise in daily COVID-19 cases for the next two to three weeks.

The Central Disease Control Headquarters said the latest weekly tally for coronavirus infections through Saturday stood at 424-thousand-877, up by 84-point-seven percent from a week earlier.

That represents a slowdown in the growth of new cases compared to the on-week growth of 105-point-six percent seen in the second week of July.

The trend of doubling, in which the daily tally is twice as high as the same day the previous week, has also slowed, with the number of new cases rising only one-point-35 times from a week ago to some 99-thousand on Tuesday.

However, Lim Suk-yeong, a senior official at the headquarters, said the reproduction number, or the average number of new infections estimated to stem from a single case, still remains high at one-point-54, adding there will be a continued rise in daily cases for two to three weeks.
Share
Print
List