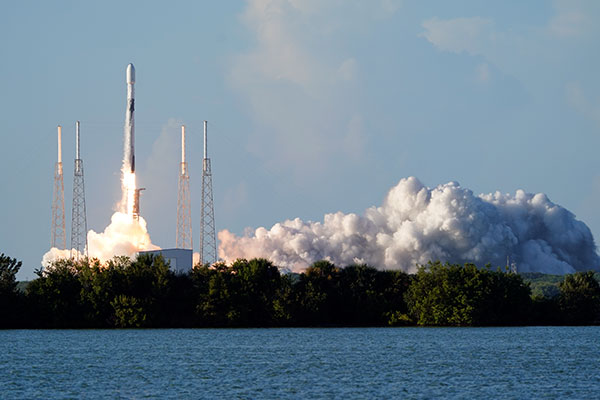 According to the Ministry of Science and ICT, the Korea Pathfinder Lunar Orbiter, also known as Danuri, was launched at 8:08 a.m. Friday, Korea time, or 7:08 p.m. on Thursday, Eastern Standard time.

Danuri, developed by the Korea Aerospace Research Institute(KARI), was launched into space from the Cape Canaveral Space Force Station in Florida on a Falcon 9 rocket developed by U.S. aerospace company SpaceX.

The space vehicle detached from the rocket about 40 minutes after liftoff at an altitude of one-thousand-656 kilometers and made its first contact with the ground station one and a half hours after launch.

The science ministry said it confirmed that Danuri successfully entered its designated trajectory as of 2 p.m..

The space vehicle arrived at the space station in Florida on July 7 and completed all the checkups and preparations for the launch. Danuri was moved to a launch pad on Thursday morning and erected at around 3 p.m. Korea time.

Danuri will take an energy-efficient trajectory called a "Ballistic Lunar Transfer" from the Earth to the moon, using the gravity of both and that of the Sun. The method uses less energy, but takes longer to reach the destination.

If all goes according to plan, Danuri will enter lunar orbit on December 16 and settle into an orbital altitude of 100 kilometers on December 31. It will conduct a year-long scientific observation of the moon.
Share
Print
List