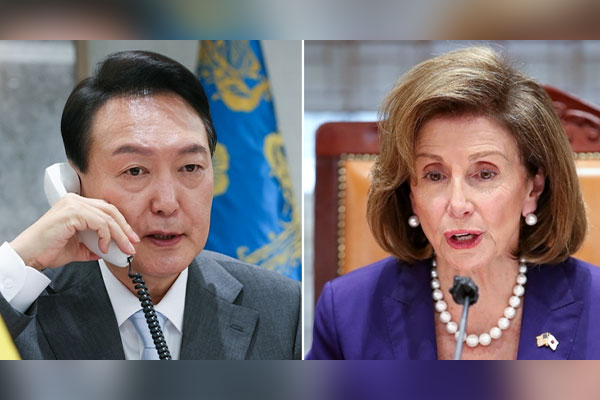 U.S. House Speaker Nancy Pelosi said on Thursday that the visit to South Korea by her and a congressional delegation reaffirmed the "strong bond" between Seoul and Washington.

Pelosi made the remarks in a statement released after her two-day trip to South Korea, stressing the resolute U.S.-South Korea alliance.

Pelosi said the United States and South Korea share a strong bond formed for security and forged by decades of warm friendship.

She added that the congressional delegation traveled to Seoul to reaffirm treasured ties and a shared commitment to advancing security and stability, economic growth and democratic governance.

As for her talks with National Assembly Speaker Kim Jin-pyo, Pelosi said that the delegation reiterated the commitment to the U.S.-South Korea alliance to strengthen security and supply chains and promote trade and investment.

Pelosi also mentioned her visit to the Demilitarized Zone in the inter-Korean border, saying that the delegation conveyed to the service members there the gratitude of Congress and the country for their patriotic service, stating that they stand as sentinels of democracy on the Korean Peninsula.
Share
Print
List