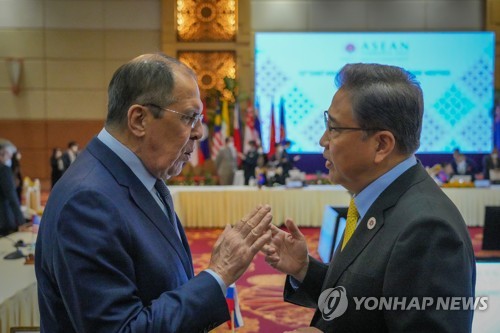 Foreign minister Park Jin expressed concerns over North Korea's preparations for a nuclear test during talks with his Russian counterpart on the sidelines of a regional foreign ministers' meeting.

Responding to Park seated beside him, Lavrov reportedly used the phrase "tit-for-tat," an apparent emphasis that Seoul and Washington are partially responsible for the increasing tensions.

The Russian minister reportedly said Moscow is closely monitoring developments in the North through various means, including satellites, and that it has sent a message that may help diffuse the situation.

Park also cast concerns over the adverse impact the protracted war in Ukraine may have on the Seoul-Moscow ties before requesting that Moscowto attentively work to prevent damage to South Korean businesses and residents in Russia.