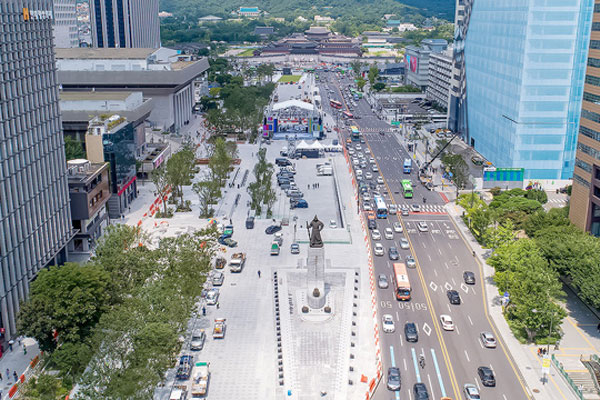 Gwanghwamun Square, a major plaza in downtown Seoul, reopened on Saturday after 21 months of renovation.

Seoul City announced the square is open to the public at 11 a.m. The refurbished site resembles a park and is intended to offer some respite to city dwellers.

A road on the western side has been removed, more than doubling the size of the square to over 40-thousand square meters.

Green space accounts for a quarter of the total area, three times larger than before, while five thousand trees have been planted across the plaza to create shade.

A performance spot has also been installed in front of the Sejong Center for the Performing Arts. A 40-meter-long fountain and a 53-meter media wall are also located near the Sejong Center.

An opening ceremony will kick off at 7 p.m., with performances from a citizens orchestra and various pop artists. Three-hundred people who made prior reservations can attend the event, while others can watch it at other venues and on LED screens.

Due to the opening ceremony, the Sejong boulevard will be closed off from 6 to 10 p.m.
Share
Print
List