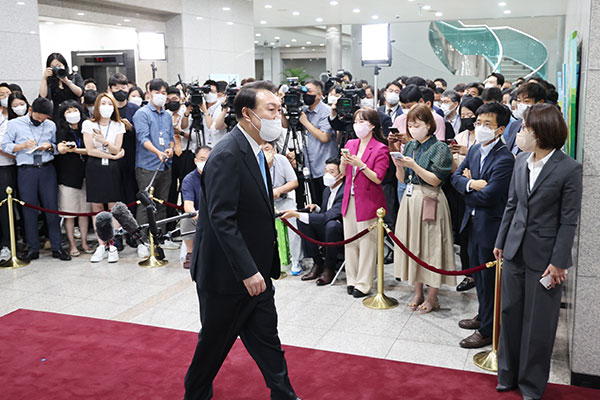 President Yoon Suk Yeol says the protection of national interests is at the forefront of concerns as the government considers South Korea’s participation in the U.S.-led semiconductor alliance known as the “Chip 4.”

Yoon made the remark on Monday in front of the presidential office in Yongsan when asked by reporters about the issue.

He said each government agency is reviewing the matter with a focus on national interests.

Seoul’s decision whether to participate in the alliance will reportedly depend on the results of a preliminary meeting of the Chip 4 which it plans to attend.

The meeting is set to convene at the end of this month or in early September.

The government has maintained a cautious stance on Seoul’s participation in the computer chip framework given that China regards the alliance as a means for the U.S. to keep Beijing in check.

In the upcoming preliminary meeting and any other related discussions, Seoul is expected to stress the need to pursue cooperation in global supply chains without excluding certain countries.
Share
Print
List