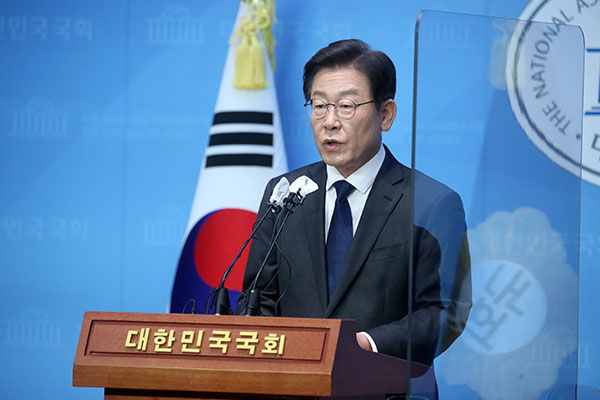 In a debate with his two rivals hosted by a local radio station on Tuesday, Lee was asked by fellow candidate and Rep. Kang Hoon-sik if he would accept an invitation by President Yoon to meet.

In response, Lee said it should be the opposition who actively makes such a proposal.

He went on to say that it is the opposition's role to hold those in power in check but also foster cooperation, adding that the DP should convey the public's will and seek solutions together as the Yoon administration appears to be politically incapacitated.

Responding to the same question, Rep. Park Yong-jin said the first step would be to form a consultative channel involving rival parties and the government to discuss economic issues and pledges that can be jointly implemented.

Meanwhile, Kang expressed a more hard-line view, urging the opposition camp to demand a complete overhaul of the presidential office and the resignation of all Cabinet members. He said the president's low approval rating in the first few months he has been in office indicates that state governance must completely change.
Share
Print
List