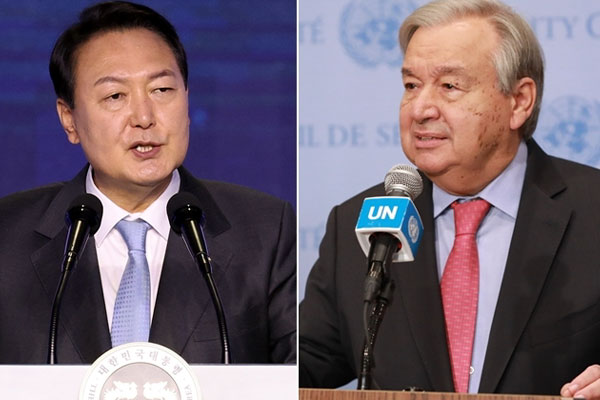 In a press briefing on Thursday, Yoon’s National Security Advisor Kim Sung-han said Yoon and Guterres, during their luncheon meeting, will discuss the North Korean nuclear issue, which poses a direct threat and challenge to the nonproliferation regime.

In addition, they will exchange opinions on various pending issues including climate change, Kim said.

Kim explained the meeting will likely serve as an opportunity to strengthen cooperation between South Korea and the U.N. and bring to light Seoul’s commitment to playing an active role in addressing international issues ahead of the U.N. General Assembly next month.

Guterres is visiting South Korea on Thursday and Friday as part of his three-nation Asian tour that includes Japan and Mongolia.

It marks the U.N. chief’s first visit to South Korea in four years since he attended the opening ceremony of the 2018 PyeongChang Winter Olympic Games.
Share
Print
List