Defense Minister: Both Koreas Must Abide by Inter-Korean Military Accord 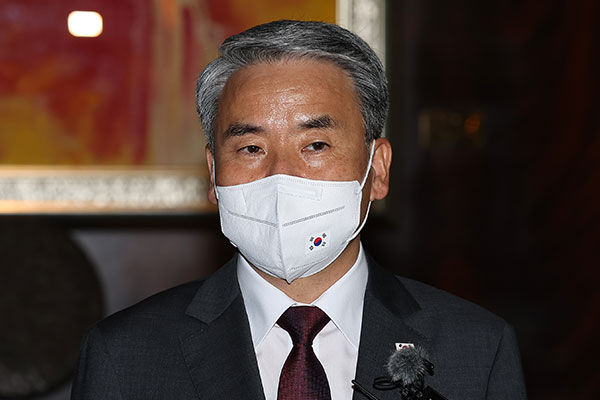 South Korean Defense Minister Lee Jong-sup has warned of the possibility of a strong response in the event of North Korea conducting a seventh nuclear test, underlining that the September 19 military agreement should be observed by both South and North Korea.

The agreement refers to a military accord signed by the two Koreas on September 19, 2018, to mitigate military confrontation on their divided peninsula.

During a press meeting on Thursday, Lee stressed that the military agreement will be worthless and short-lived if only South Korea abides by the pact while North Korea fails to do so.

When asked whether Seoul will nullify the accord if Pyongyang presses ahead with another nuclear test, Lee said it is not a matter to be decided by the defense minister alone. He said it is necessary to collate opinions on the potential risks of scrapping the agreement from relevant agencies, including the foreign ministry, before making a decision.

The minister warned that a fresh round of North Korea’s nuclear test, if conducted, will prompt South Korea, in close consultation with the U.S., to counter with a grievous response.

While the allies will not go as far taking military action such as destroying nuclear facilities, they will show that North Korea cannot get what it wants with nuclear threats, Lee said

The minister added that the allies will make every effort to deter Pyongyang from using its nuclear weapons.
Share
Print
List