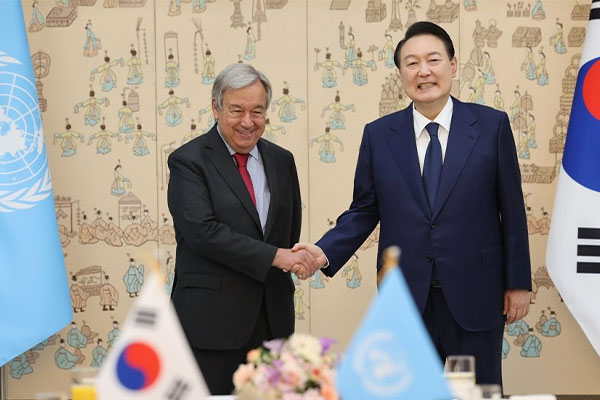 At a luncheon with President Yoon Suk Yeol at his Yongsan office on Friday, the visiting UN chief said such an endeavor is fundamentally important in attaining regional security, peace and stability.

In the discussions, Guterres used the term "CVID," which was shelved under the previous Moon Jae-in administration to avoid offending Pyongyang. The secretary-general’s comments reflect the recent attention he has given to the issue, calling on the international community to strengthen the Treaty on the Non-Proliferation of Nuclear Weapons(NPT).

He also expressed condolences to the victims and their bereaved families of the recent rain-triggered flash floods in the country.

Yoon, in response, conveyed his respect for the UN chief and his appreciation for Guterres’ dedication to solving the difficult issues facing the international community.
Share
Print
List