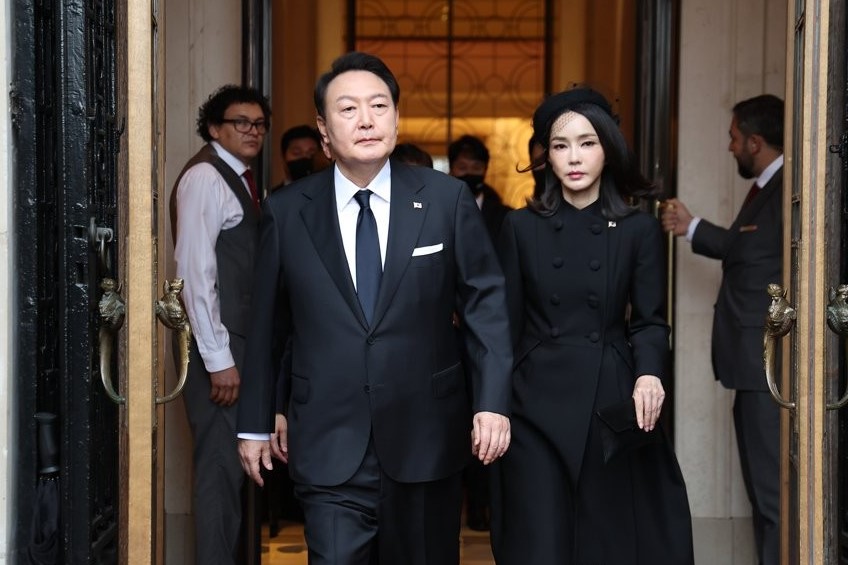 President Yoon Suk Yeol paid tribute to Queen Elizabeth II during a state event for foreign dignitaries at Buckingham Palace hosted by King Charles III on the eve of Her Majesty’s state funeral.

After arriving in London on Sunday, Yoon and First Lady Kim Keon-hee headed straight to the proceedings and offered their condolences to Charles III on the death of the queen.

The top office’s spokesperson, Kim Eun-hye, said in a briefing that the president told the King he would always remember the Queen, Britain's longest reigning ruler, who devoted her life as a guardian of peace and freedom while adding that the South Korean people also mourn her passing.

Yoon also conveyed his congratulations to Charles III for assuming the British throne.

The new British monarch, on his part, thanked the Korean leader for visiting Britain before personally introducing Camilla the Queen Consort, Prince and Princess of Wales, William and Kate Middleton.

The Princess of Wales expressed a desire to visit South Korea if invited, saying she had never visited the nation before, while Charles III also said he hopes to have another opportunity to travel to South Korea, which he last visited in 1992. Yoon, in turn, said they are always welcome.
Share
Print
List