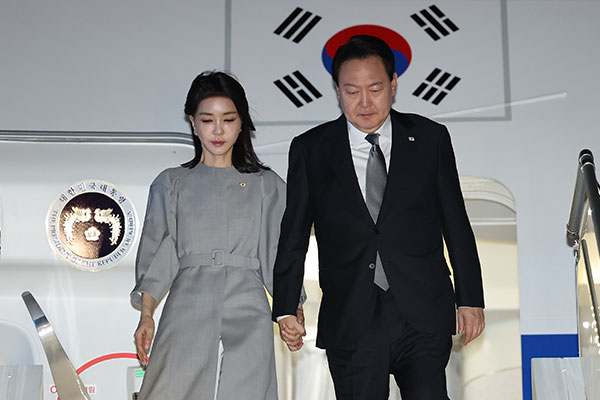 Yoon, who flew from London after attending the state funeral of the late Queen Elizabeth II, is set to engage in multilateral diplomacy in New York.

The president will likely address the first day of the Assembly's high-level General Debate between 1:30 and 2:00 a.m. Wednesday, Korea time, as the tenth of 185 leaders of UN member states scheduled to take the podium.

Yoon is expected to call for cooperation and solidarity among democratic nations while stressing the importance of economic security.

He will also outline Seoul's contributing role as a global leader and publicly urge Pyongyang to take steps toward denuclearization by proposing his "bold initiative" offering concessions in exchange for the regime's disarmament efforts.

The president is scheduled to discuss strengthened cooperation with the UN with Secretary-General António Guterres. He will also hold separate talks with U.S. President Joe Biden and Japanese Prime Minister Fumio Kishida on Wednesday without a preset agenda, according to Seoul's presidential office.
Share
Print
List