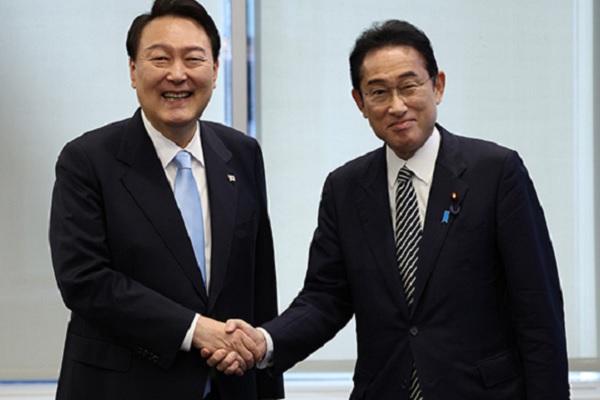 President Yoon Suk Yeol and Japanese Prime Minister Fumio Kishida have agreed on the need to improve relations between the two countries by resolving pending issues in the first summit in almost three years.

The South Korean presidential office issued a press release summarizing Yoon and Kishida's meeting on Wednesday in New York on the sidelines of the UN General Assembly.

According to the top office, the two leaders agreed to instruct their diplomatic authorities to accelerate talks to improve bilateral ties, as well as continue direct communication between themselves on pending issues.

While the statement did not specify what "pending issues" are to be addressed, Seoul-Tokyo relations have been strained over the wartime forced labor and other issues related to their colonial past.

Yoon and Kishida also shared concerns about the North Korean nuclear program and agreed to closely cooperate with the international community to respond to threats from the regime.

The 30-minute summit in a building close to the UN headquarters was the first meeting between the leaders of the two neighbors in two years and nine months since December of 2019, when former South Korean President Moon Jae-in met with then-Japanese Prime Minister Shinzo Abe in China.
Share
Print
List