Finance Minister: High Uncertainties Likely to Continue for Some Time 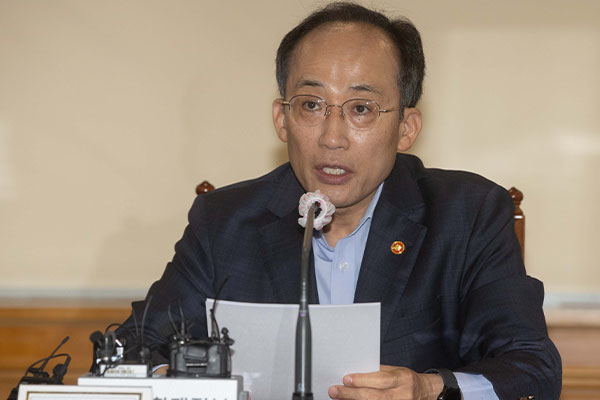 Finance Minister Choo Kyung-ho said that high uncertainties in the domestic financial and foreign exchange markets may continue for a considerable period of time.

The minister presented the projection on Thursday in a meeting with the chief of the central bank and top financial officials after the U.S. Federal Reserve raised its key interest rate by three-quarters of a percentage point again to a range of three percent to three-point-25 percent.

Choo said that volatility in the international market has increased after the Fed slashed its growth outlook for this year by one-point-five percentage points to zero-point-two percent, while possible additional rate hikes exceed market estimates, with Fed officials predicting a year-end rate of four-point-four percent.

The minister said that as the U.S. and Europe have been accelerating their monetary tightening, there is a possibility that high uncertainty in the financial markets will continue for a while.

The minister said that the government would do its best to stabilize the market in close cooperation with the central bank and the Financial Supervisory Service.
Share
Print
List