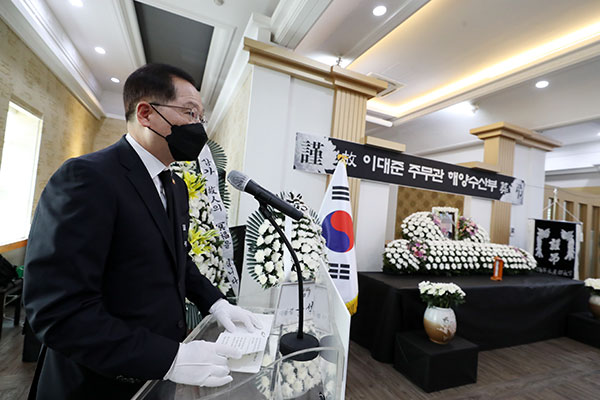 The funeral of Lee Dae-jun, a South Korean fisheries official who was shot dead by the North Korean military in 2020, was held in Mokpo, South Jeolla Province on Thursday.

Some 100 mourners attended the funeral, including the bereaved family, Lee's colleagues and Minister of Oceans and Fisheries Cho Seung-hwan, who expressed hope that the victim and his family can find peace after a two-year struggle.

Lee's brother said such a tragedy must not reoccur and urged the country to restore his brother's honor. He added that he will legally hold accountable everyone culpable in the "crime," including former President Moon Jae-in.

The family plans to hold a press conference after pressing charges against Moon next week.

In September 2020, Lee went missing while on duty near the inter-Korean maritime border and was shot dead in North Korean waters after being found by the North's military.

The previous Moon administration had declared that Lee had attempted to defect to the North, but that conclusion was reversed by the Korea Coast Guard in June of this year when it said there was no evidence backing such assumption.
Share
Print
List