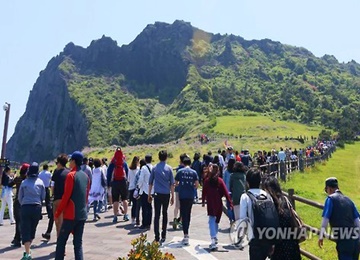 The cumulative number of domestic and foreign travelers to Jeju Island has topped ten million so far this year.

According to Jeju Tourism Association on Thursday, the cumulative number of Koreans and foreigners who visited the southern resort island this year marked ten million-four-thousand-145 as of Monday.

That's an increase of 22-point-seven percent from a year earlier.

The figure surpassed the ten million mark more than one month earlier than last year, when it topped the mark on November 8.

It's not unusual for the annual figure to surpass ten million, as it never fell below the mark since 2013.

However, 2020 saw the tally plunge by 33 percent on-year to ten million-230-thousand due to the COVID-19 pandemic.

The cumulative figure for the whole of 2022 is expected to recover to pre-pandemic levels after authorities lifted distancing measures and amid soaring travel demand.
Share
Print
List