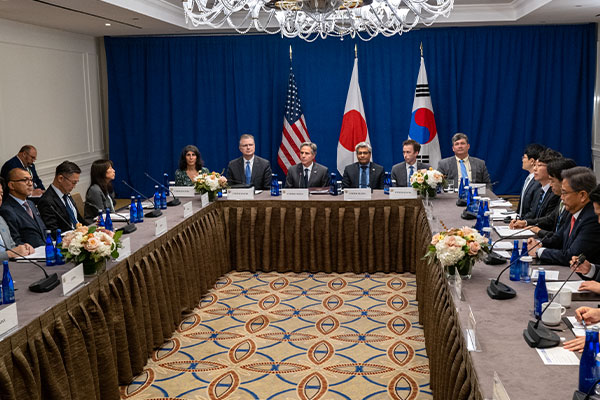 The top diplomats of South Korea, the United States and Japan have reaffirmed that a nuclear test by North Korea would be met with a strong and resolute response from the international community.

The U.S. State Department said in a press release on Thursday that South Korea's Minister of Foreign Affairs Park Jin, U.S. Secretary of State Antony Blinken and Japanese foreign minister Yoshimasa Hayashi issued a joint statement to that effect after the trilateral talks in New York.

In the statement, the three sides expressed their serious concern over the North's escalatory and destabilizing messaging related to nuclear weapons use, including its adoption of a new law on nuclear policy.

The diplomats condemned the North's numerous ballistic missile launches this year and underscored the importance of working together to achieve the shared goal of the complete denuclearization of the Korean Peninsula.

After the talks, minister Park told reporters that the three sides agreed on the need for close cooperation among the three nations and preparations for robust responses to the North's nuclear threats.

In opening remarks for the talks, Secretary Blinken stressed trilateral cooperation, saying that collaborative efforts are more effective not only in dealing with regional security issues, but with global issues.
Share
Print
List