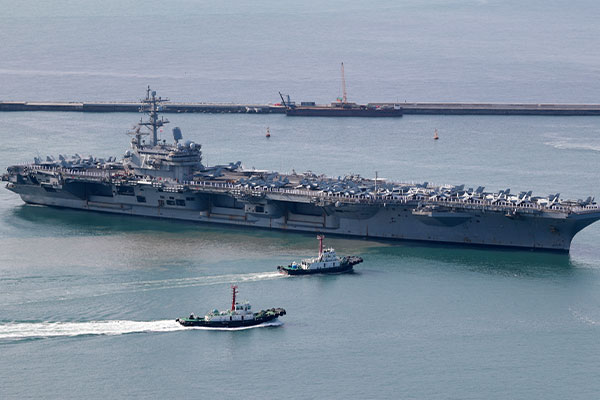 The nuclear-powered U.S. aircraft carrier, the USS Ronald Reagan, arrived in South Korean waters on Friday to participate in the first exercises involving a U.S. carrier in five years.

The carrier strike group docked at the Republic of Korea Fleet Command in the southeastern port city of Busan at 9:00 a.m., consisting of the USS Ronald Reagan, the Aegis-equipped USS Barry destroyer and the guided-missile cruiser, the USS Chancellorsville.

The three warships, along with the nuclear-powered USS Annapolis submarine, are expected to take part in joint drills conducted in the Korean Theater of Operations off the east coast later this month.

The training comes after the leaders of South Korea and the U.S. reaffirmed their commitment to deploy U.S. strategic assets to the Korean Peninsula back in May as a part of a reinforced deterrence against North Korea's evolving military threats.

Participating in South Korean naval exercises for the first time since 2017, the 97-thousand-ton Ronald Reagan is capable of carrying some five-thousand sailors and 90 aircraft, including F/A-18E Super Hornets and E-2D Hawkeye early warning and control aircraft.
Share
Print
List