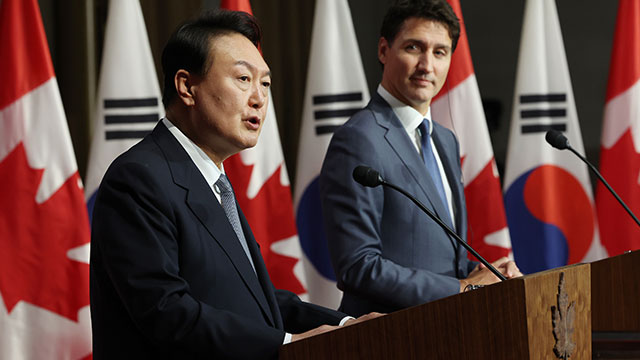 South Korea and Canada have upgraded their relationship to a comprehensive strategic partnership.

The leaders said the two countries and their people were more than ever ready to modernize bilateral relations and promote shared values through joint action.

They agreed to elevate ties to a comprehensive strategic partnership based on the five priorities of safeguarding democracy, freedom, human rights, rules-based global order and stepping up defense partnership.

The two leaders also welcomed the launch of a new bilateral dialogue channel on climate change and renewed MOUs on defense supply cooperation and industrial technology, each signed by the two countries' respective agencies.

The two sides will also seek to launch a high-level dialogue on economic security.

The leaders also reaffirmed the joint goal of the complete denuclearization of North Korea. Yoon briefed Trudeau on Seoul's "bold initiative" for Pyongyang and the Canadian leader expressed strong support for South Korea's efforts to achieve peace and prosperity on a nuclear-free Korean Peninsula.

Yoon also invited Trudeau to visit South Korea, which the prime minister accepted and thanked him for.
Share
Print
List