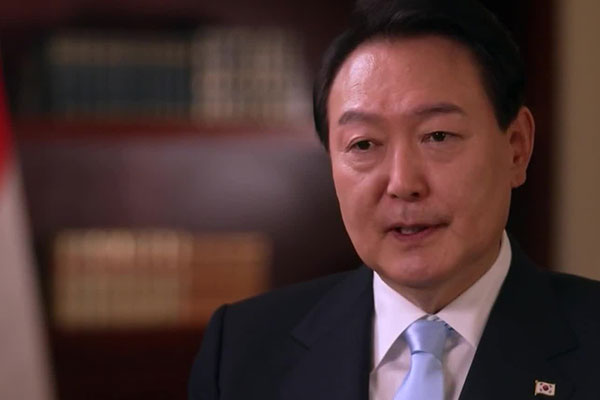 President Yoon Suk Yeol says that a Chinese attack on Taiwan raises the likelihood that North Korea would engage in further provocations.

The president shared the perspective in an interview that aired on Sunday with CNN anchor Fareed Zakaria conducted in New York last Wednesday during his participation at the UN General Assembly, the presidential office said on Monday.

Yoon said while global attention is focused on Ukraine as well as China’s escalation of tensions with respect to Taiwan, the most imminent threat for South Korea is posed by Pyongyang’s nuclear missile program.

When asked whether South Korea will assist the U.S. if China attacks Taiwan, he avoided a direct answer and instead said there would be an increased possibility of a North Korean provocation in the event of military conflict around Taiwan. He said the top priority for South Korea and its alliance with the U.S. will therefore be a robust defense posture, stressing they must deal with the North Korean threat first.

The CNN host asked whether that means Yoon will ask the U.S. to prioritize North Korea’s provocation over China’s attack on Taiwan, to which the president said it wouldn’t be appropriate to reply about U.S. priorities.

He said both the Korean peninsula and Taiwan are very important for the U.S. and will be defended by the U.S. together with their allies and partners.
Share
Print
List