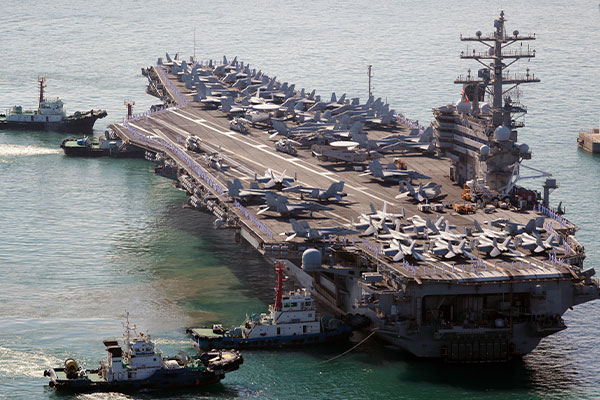 South Korea and the U.S. kicked off joint maritime exercises on Monday that will see the participation of a U.S. carrier strike group.

According to the Navy, the joint drill will include various exercises, including the Maritime Counter Special Operations Forces exercise which focuses on enhancing coordination and interoperability between South Korean and U.S. forces.

From South Korea, the 76-hundred-ton Aegis destroyer, the Seoae Ryu Seong-ryong, and the 44-hundred-ton Munmu the Great destroyer will take part, while the U.S.’ strike group is composed of the USS Ronald Reagan aircraft carrier, the Aegis-equipped USS Barry destroyer and the USS Chancellorsville guided-missile cruiser.

The Navy said the joint exercise, the first of its kind since 2017, was organized to demonstrate the South Korea-U.S. alliance’s strong intent to respond to North Korea’s provocations and to improve their navies’ ability to carry out joint operations.

The Navy added that Seoul and Washington will maintain their joint maritime defense readiness based on their alliance.
Share
Print
List