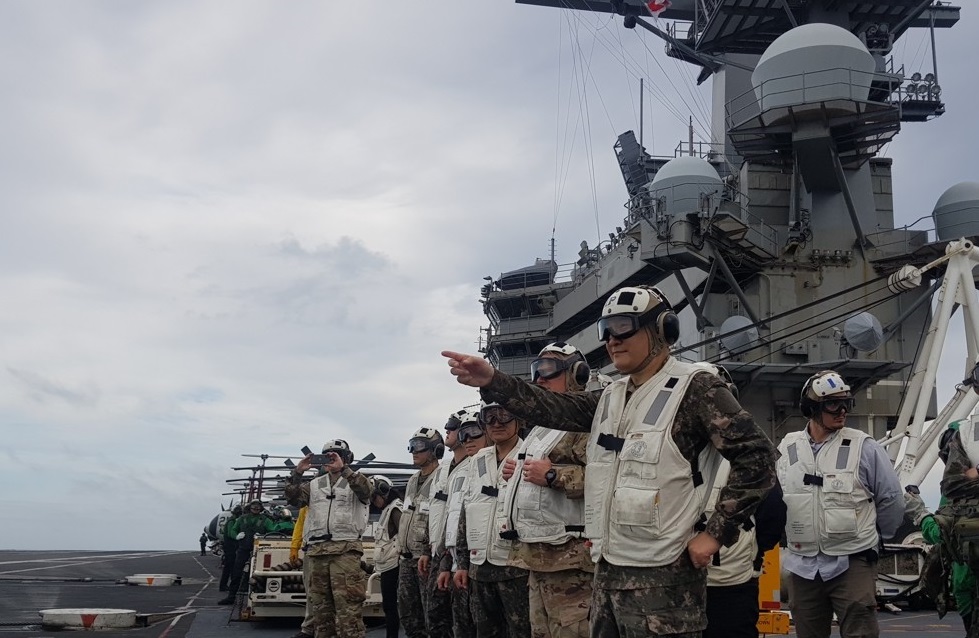 During a visit to a U.S. aircraft carrier participating in combined military exercises this week, Joint Chiefs of Staff(JCS) Chairman Kim Seung-kyum said a North Korean provocation would be met by a strong response.

According to the JCS, Kim and Gen. Paul LaCamera, the commander of the Combined Forces Command(CFC), were briefed on the ongoing exercise aboard the USS Ronald Reagan on Tuesday.

Kim said that the Seoul-Washington alliance will sternly respond to any type of North Korean provocation or aggression, adding that Pyongyang will be reminded that there is no scenario in which the regime survives should it attempt a nuclear strike.

The JCS chief said the allies are expected to maintain a readiness posture against North Korean threats and continue cooperation to strengthen the implementation of Washington's extended deterrence.

Emphasizing that the U.S.’ commitment to South Korea's defense and its extended deterrence pledge are ironclad, LaCamera said the U.S. carrier strike group's participation in the combined drills displays such commitment.

Participating in South Korean naval exercises for the first time since 2017, the 97-thousand-ton Ronald Reagan is capable of carrying some five-thousand sailors and 90 aircraft, including F/A-18E Super Hornets and E-2D Hawkeye early warning and control aircraft.
Share
Print
List