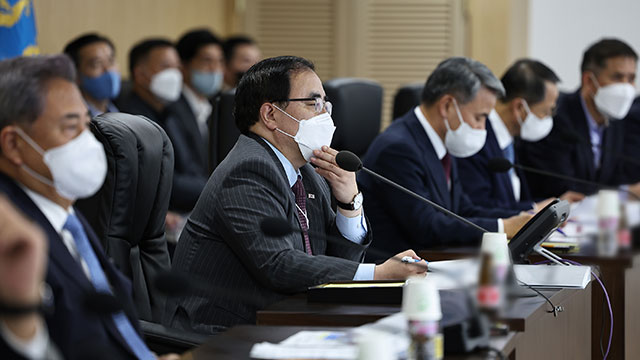 The NSC convened the session after South Korea's Joint Chiefs of Staff(JCS) said it detected two short-range ballistic missiles fired between 8:48 p.m. and 8:57 p.m. on Thursday from the Sunchon area in South Pyongan Province toward the East Sea.

The presidential office said in its press release that President Yoon Suk Yeol was immediately briefed about the launches and National Security Adviser Kim Sung-han chaired the NSC meeting to receive a briefing from the JCS.

In the meeting, the attendees shared the view that the situation is grave due to the North's recent series of ballistic missile launches conducted around the combined maritime drills between Seoul and Washington and U.S. Vice President Kamala Harris' visit to South Korea.

The NSC decided to sternly respond to the North's provocation based on the firm South Korea-U.S. combined defense posture, while preparing for additional provocations.

The NSC also strongly condemned the launches as repeat violations of UN Security Council resolutions and decided to strengthen sanctions against the North along with its allies and the international community based on the cooperation between Seoul and Washington.
Share
Print
List