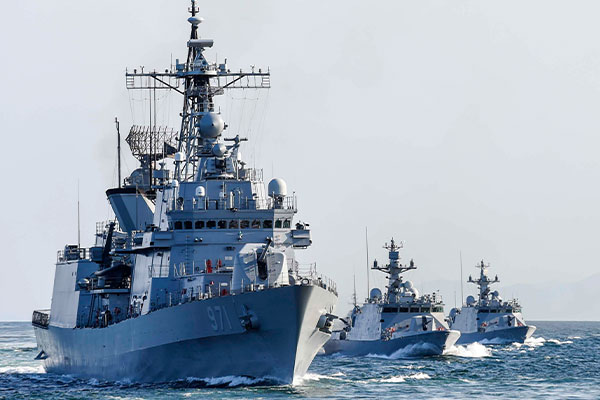 Anchor: Amid rising concerns of North Korea's nuclear and missile capabilities, South Korean and U.S. navies were joined by the Japan Maritime Self-Defense Force on Friday in the East Sea to conduct an anti-submarine exercise for the first time in five years. It comes in the wake of three short-range ballistic missile(SRBM) tests by North Korea this week.
Tom McCarthy has more.

Report: In waters roughly 150 kilometers from the easternmost Dokdo islets in the East Sea, South Korea's Munmu the Great destroyer, the USS Ronald Reagan aircraft carrier and a Japanese Asahi-class destroyer scoured the waters to locate the USS Annapolis.

The good-natured rivalry aside, the three sides were also testing protocols on sharing information to ensure their interoperability.

The drill on Friday marks their first three-way anti-submarine exercise since April 2017, when they staged drills in waters south of Jeju Island.

With Pyongyang’s recent passage of a new law authorizing preemptive nuclear missile launches when it deems necessary, concerns are mounting over the North's  SLBM capabilities.

While confirming that the allies and Japan are working to effectively cope with North Korean nuclear and missile threats through the exercise, a South Korean defense official also concurred with views that Japan's participation indicates its intention to join U.S.-led efforts to contain China.
Tom McCarthy, KBS World Radio News.
Share
Print
List