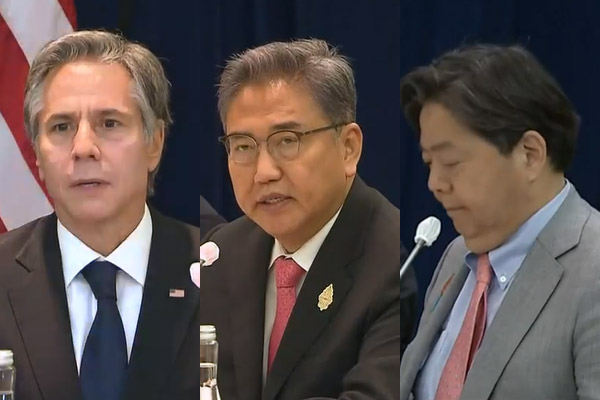 According to the foreign ministry on Tuesday, Park and U.S. Secretary of State Antony Blinken strongly condemned the missile provocation as a violation of UN Security Council resolutions, which they said threatens peace and stability on the Korean Peninsula and around the world.

The top diplomats agreed to strengthen communication and coordination with each other and within the trilateral security framework with Japan to draw up a joint response at the United Nations.

A condemnation was also issued during Park's talks with Japanese foreign minister Yoshimasa Hayashi, in which the ministers agreed that the North's nuclear and missile provocations would only serve to bolster regional security cooperation.

Park and Hayashi also assessed that the recent meeting of their leaders on the sidelines of the UN General Assembly last month provided momentum for improved bilateral ties, and agreed to closely consult on resolving pending issues, an apparent reference to the issue of Japan's wartime forced labor.
Share
Print
List