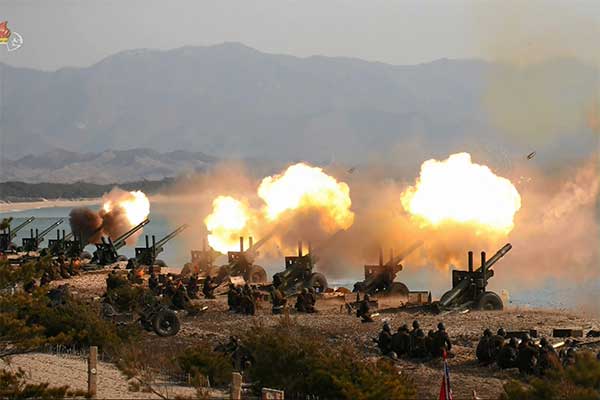 The U.S. has called on North Korea to cease all provocative actions but reaffirmed that it remains open to diplomacy and dialogue.

In a Friday briefing coming hours after the North fired hundreds of artillery shells into an agreed buffer zone with South Korea, the State Department's principal deputy spokesperson Vedant Patel said the U.S. is aware of those reports and calls on the North to cease all provocations and threatening actions.

He said Washington again condemns the North's recent ballistic missile launches and other provocative action, saying the launches are in violation of a number of U.N. Security Council resolutions.

Patel said that stability in that region continues to be a key tenet of U.S. National Security Strategy and reaffirmed the country's ironclad commitment to South Korea and Japan.

He also reiterated that even in the light of recent developments, the U.S. continues to believe the ultimate goal is the complete denuclearization of the Korean Peninsula and remains open to diplomacy and dialogue as a step towards getting there.

Regarding the lack of progress in related discussions at the UN Security Council due to opposition from China and Russia, Patel said all but two countries have supported the related resolutions.

He added that those two countries have parroted the same disinformation alluding to some kind of U.S. provocation as it relates to these North Korean launches, which he said is certainly not the case.
Share
Print
List