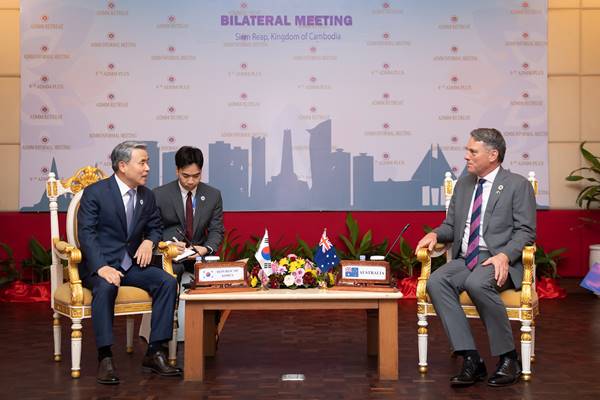 The defense chiefs of South Korea and Australia held talks in Cambodia on Tuesday and agreed to expand bilateral cooperation in the arms industry.

According to Seoul's defense ministry, defense minister Lee Jong-sup and his Australian counterpart, Richard Marles, held a meeting in Siem Reap on the sidelines of the Association of Southeast Asian Nations(ASEAN) Defense Ministers' Meeting-Plus.

In their first meeting since Lee's visit to Australia in August, the two sides agreed to further enhance cooperation in defense and the military, with a focus on increased personnel exchanges.

The two chiefs also agreed to up the frequency and level of bilateral and multilateral military drills and expand cooperation in the arms industry to improve interoperability between the two countries' militaries.

The two sides also shared the view that advances in North Korea's nuclear and missile capabilities and its provocations pose a threat to peace and stability of the Korean Peninsula and in the region as well as the world.
Share
Print
List