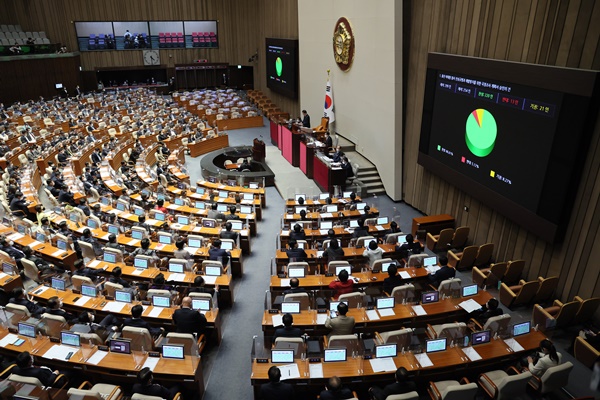 The National Assembly on Thursday approved a plan to hold a parliamentary probe on the fatal Itaewon crowd crush.

The plan passed parliament by a vote of 220 to 13 at a parliamentary plenary session, with 21 abstentions.

Main opposition Democratic Party lawmakers who attended the meeting all voted for the plan, while 12 of the 13 votes against the plan were cast by lawmakers of the ruling People Power Party.

The special committee in charge of the probe comprises 18 lawmakers -- nine from the DP, seven from the PPP and two from minor opposition parties.

The committee will conduct the probe for 45 days starting Thursday, with a possible extension pending parliamentary approval.

Government agencies that will be under scrutiny include the state affairs monitoring team of the presidential office, the national crisis management center, the prime minister's office, the interior and health ministries, as well as the Supreme Prosecutors Office, the police and the fire agency.

Rival parties wrangled over the scope of the investigation, which held up an agreement. The two sides compromised and agreed to only summon prosecution officials in charge of drug crimes, which has been pointed out as part of the reason police did not focus on crowd control on the day of the accident.
Share
Print
List