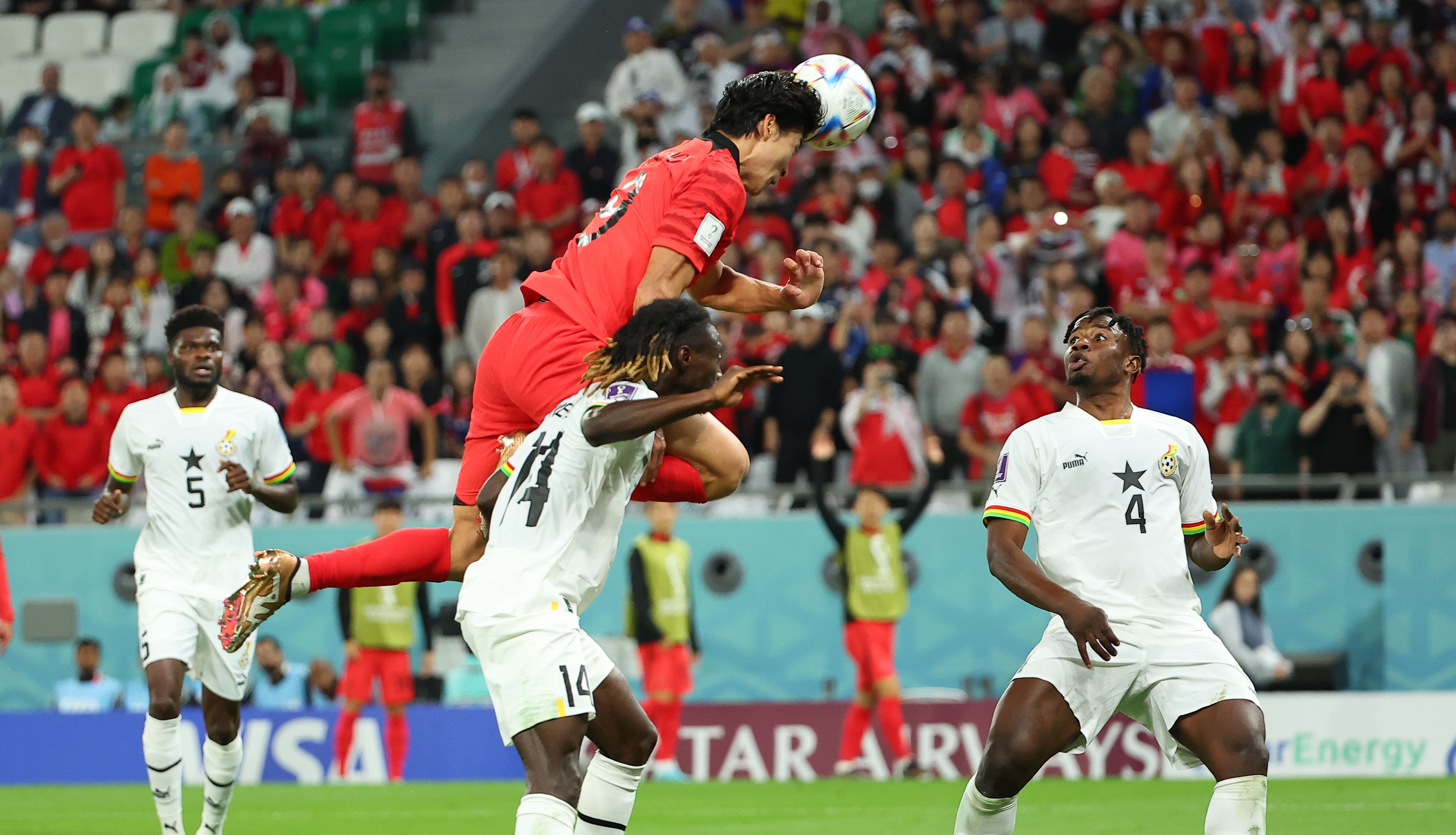 Anchor: Team Korea is now on the brink of group elimination at the 2022 Qatar World Cup after suffering a 3-2 defeat against Ghana in their second match on Monday night. The Taegeuk Warriors were able to nullify Ghana’s early lead with a second-half rally on Cho Gue-sung’s headers but failed to turn the tide. The Koreans must win their remaining duel with group favorite Portugal and will also have to rely heavily on the remaining matches among their rivals to advance.
Moon Gwang-lip has more.

Korea earned seven corner kicks in the first 18 minutes and dominated with 64 percent of the possession in the first 20 minutes. Coming off a match with no shots on goal against Uruguay last Thursday, the Taegeuk Warriors hit a handful of shots on target against Ghana in the first half.

The Ghanaians, however, were more effective with the ball, with Mohammed Salisu giving Ghana the lead by connecting to the end of Jordan Ayew’s freekick into the box in the 24th minute, followed ten minutes later by Mohammed Kudus scoring a second for Ghana.

Korea sought to turn the game around by utilizing its attacking players, including Son Heung-min, who started for the second consecutive match sporting a protective mask that covered his facial fractures. However, Cho Gue-sung, the K-League's top scorer, proved to be better than the Tottenham Hotspur forward at making the most of chances, heading in a left-footed cross from substitute Lee Kang-in 13 minutes into the second-half.

Three minutes later, Cho again connected to a Kim Jin-su cross with another header that was too strong for goalie Lawrence Ati Zigi to parry away, bringing the score even.

Team Korea ultimately fell short of further breaking down the Ghanian defense, losing a crucial chance of securing favorable odds of advancing to the knockout round for the first time in 12 years after Kudus sealed the victory in the 68th minute.

The game was not without its moments of suspense, with the ball appearing to briefly make contact with the arm of Andre Ayew before Salisu opened the scoring following a scramble in the box, but after a VAR check, referee Anthony Taylor allowed the goal to stand.

Talyor also showed a red card to South Korea’s coach Paulo Bento as the Portuguese coach protested the English referee’s controversial willingness to end the match even as the Koreans were proceeding with a corner kick earned in the added time of the second half for one last chance at redemption. That will prevent Bento from taking charge of the team during Korea’s remaining match against Portugal and could make it even more difficult for Korea to advance.

With only a point on the board, Korea has an uphill battle to secure the last of the two berths to the Round of 16, with a must-win over ninth-ranked Portugal on Saturday likely to be only a part of the requirements.

Korea will also have to look for much help from the remaining matches among its rivals. Portugal will play Uruguay in the second round of Group H games.

With both Korea and Ghana aiming for a victory to avoid an early exit from Qatar ahead of clashes with group favorites Portugal and Uruguay, respectively, both teams were out in full force from early on during Monday's match, but it was the Black Stars who enjoyed the last laugh.

Korea is now on the precipice of group-stage elimination for the third consecutive World Cup. In the previous edition in Russia, they finished third in the group stage and were eliminated along with Germany, who they managed to beat 2-0.

In the Brazil World Cup, they finished in last place in the group with only a point from a 1-1 draw against Russia.

With Ghana earning three points and scoring five goals, including against Portugal, it will not be easy for Korea to surpass the African side if they are the ones vying for the second berth to the last 16.

The Koreans will more likely have to rely on a less unlikely yet still unreliable scenario of Portugal beating Uruguay and Uruguay beating Ghana in addition to Korea besting Portugal.

Korea’s loss on Monday gives Ghana a further edge against the Asian side. Before the match, Korea and Ghana evenly split their six showdowns with three wins each, but Team Korea managed to win only one of the four recent duels with their last one in June of 2014 ending in a 4-0 thrashing by the African side.

In 2010, the Black Stars advanced to the World Cup quarterfinals, establishing the side as an emerging football force. In the previous Germany World Cup, they also reached the knockout stage. In the 2014 Brazil World Cup, however, they were eliminated from the group stage in last place. In the 2018 World Cup, they failed to qualify.

Korea will take on Portugal in their last group game set to occur simultaneously while Ghana and Uruguay will play their final showdown in Qatar.