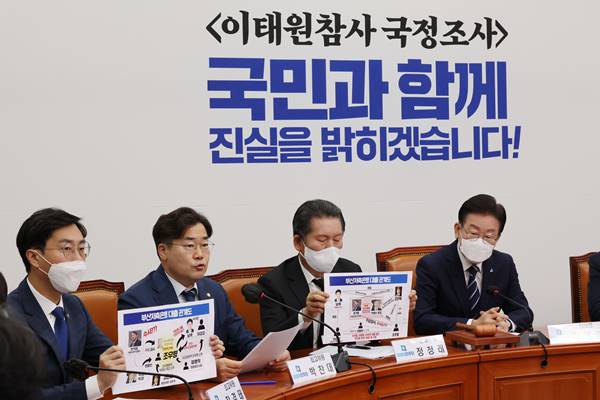 The main opposition Democratic Party(DP) has temporarily withheld a plan to submit a motion to parliament this week seeking the dismissal of interior and safety minister Lee Sang-min over the deadly Itaewon crowd crush.

The DP held a general meeting of lawmakers on Tuesday and discussed the motion devised the previous day during the party’s high-level strategic meeting.

DP floor leader Park Hong-keun told reporters following the meeting that opinions have converged on the need to take a move to hold the minister accountable on the parliamentary level.

However, when asked on what kind of move and when it shall be taken, he said it will be decided by taking various matters into account including the presidential office, the ruling bloc and the parliamentary schedules.

The party initially planned to submit a dismissal motion against the minister to the National Assembly on Thursday and pass it during a plenary session on Friday.

The DP reportedly concluded that final decisions will be left up to the party leadership, including how to hold the minister to account and when to take action.
Share
Print
List