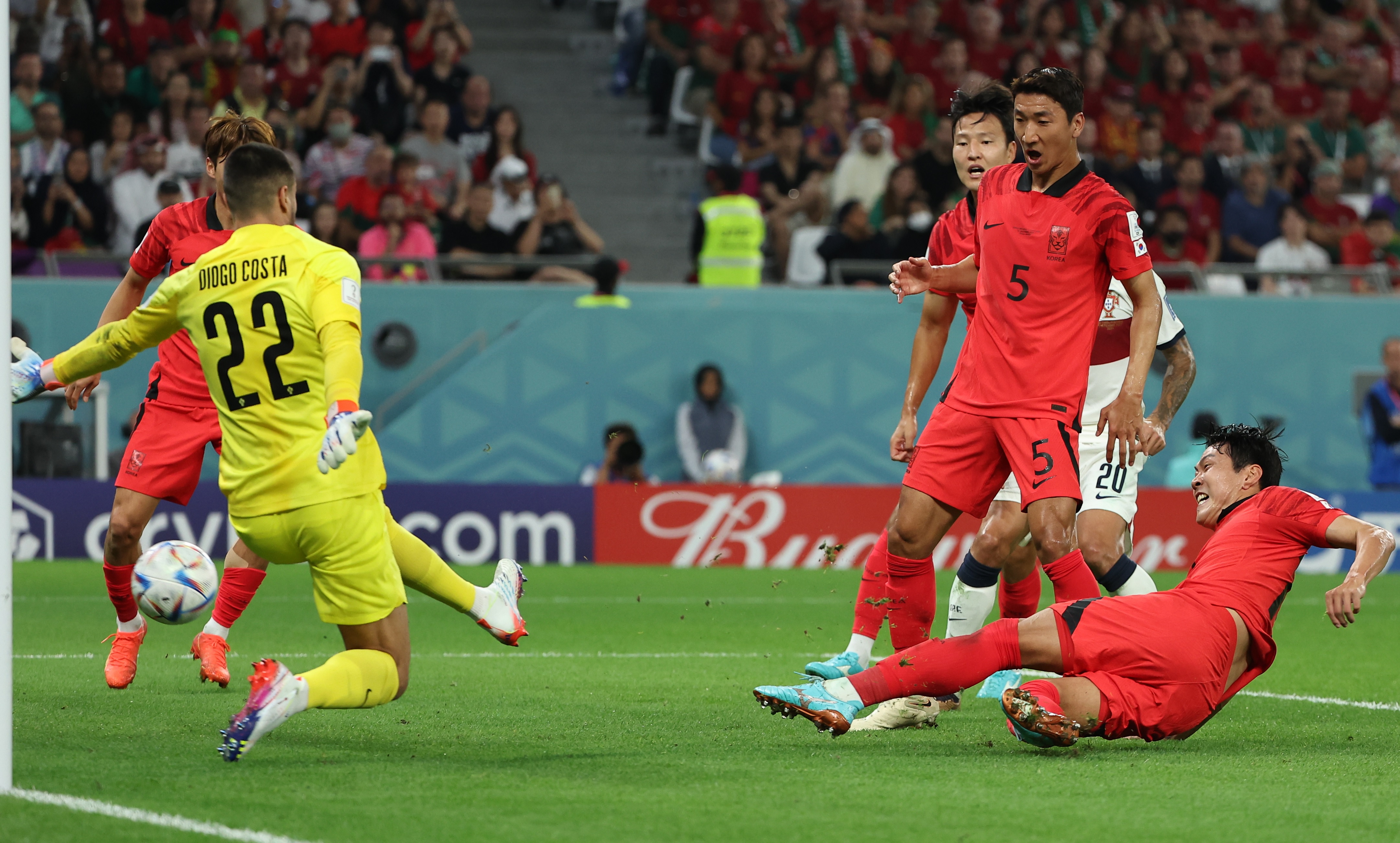 South Korea and Portugal go into the half even at 1-1 in their third and final Group H match at Education City Stadium in Al Rayyan on Friday local time.

Ricardo Horta opened the scoring for the European side five minutes into the match, but Kim Young-gwon leveled the score in the 27th minute.

Another defender, Kim Jin-su, sent the ball into the back of the net in the 17th minute but the goal was declared offside. Korean goalkeeper Kim Seung-gyu pulled off a pair of fine saves in the 34th minute and 41st minute to deny Portugal’s crucial chances.

A draw with the ninth-ranked European powerhouse would be normally considered a good fight for Korea, but, with only a point on the board, the Taegeuk Warriors must win the match. They are also hoping the other Group H match of the day will go their way in order to break through to the Round of 16 against all odds.

The results at the half seem favorable; in a match played simultaneously at Al Janoub Stadium in Al Wakrah, Uruguay led Ghana 2-0 at halftime.

With Portugal already securing a spot in the last 16 with two victories, Korea need Uruguay to beat Ghana but with as few goals as possible. South Korea entered the match in third place in the group with a one-goal edge over Uruguay and should seek not just a win but a big win over Portugal to have a better shot at the last 16.

A draw between Uruguay and Ghana can still lift Korea to the knockout round but only if it can overturn a massive goal difference with Ghana. The western African side had a plus-three goal differential over Korea before the match.

Team Korea coach Paulo Bento was absent from the touchline due to a red card received during its previous match against Ghana for protesting a call by referee Anthony Taylor, who denied Korea’s last chance at an equalizer by blowing the game-ending whistle when Korea was setting up for a corner.

It is only the second faceoff between South Korea and Portugal, with the previous one in the group stage at the 2002 World Cup ending in a 1-0 upset for South Korea on a Park Ji-sung goal that knocked Portugal out of the tournament.

Bento, who was a member of the losing Portuguese side in 2002, signed with Team Korea in 2018 to lead the side through the 2022 World Cup and may lose the chance to renew his contract depending on the result of the very match between his latest team and the team of his home country.

If Korea secures the remaining spot in the Round of 16, it will face off with the Group G winner, which is very likely to be Brazil. The Group G table-topper will be confirmed early Saturday, Korea time.

Korea’s would be the third knockout berth earned by an Asian Football Confederation(AFC) member at Qatar following Australia and Japan.
Share
Print
List