S. Korea Advance to Round of 16 in World Cup with Shock Win over Portugal 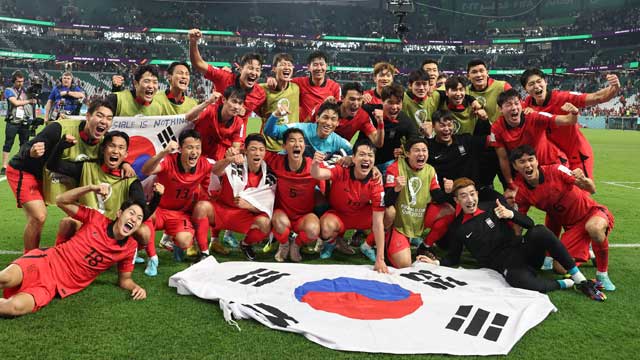 Anchor: South Korea made it through to the Round of 16 in the 2022 World Cup on Friday in Qatar, with a stoppage-time goal securing a victory over Portugal, as well as the three points needed to clinch second place in the group. Team Korea was assisted by a win for Uruguay, who kept Ghana at bay while not scoring enough to surpass Korea. The Taegeuk Warriors will now face favorites Brazil in their first knockout stage match next week.
Tom McCarthy brings us the details.

Report: South Korea advanced to the Round of 16 of the 2022 Qatar World Cup with a 2-1 come-from-behind victory over Portugal in their third and final Group H match at Education City Stadium in Al Rayyan on Friday, local time.

Group leaders Portugal scored in the fifth minute through Ricardo Horta, but Korea managed to respond 22 minutes later when a Lee Kang-in corner kick deflected off Portuguese captain Cristiano Ronaldo and fell to defender Kim Young-gwon who slotted it into the net.

Both sides went in search of a breakthrough in the second half, but none came until the 91st minute, when a Portugal corner was cleared to Team Korea’s talisman, Son Heung-min, who sprinted up the pitch to the edge of Portugal’s goal box.

Surrounded by defenders, he slid a pinpoint pass into the path of substitute Hwang Hee-chan, whose low shot was out of reach for the Portuguese goalkeeper to put Korea up 2-1.

It was still not over, however, with the results of the other Group H match happening simultaneously between Ghana and Uruguay having a direct impact on the group rankings. Uruguay struck twice in the first half to push Ghana to last in the group, but the 2-0 scoreline was not enough for the South Americans to pass Korea on points, goal difference or goals for, delivering Korea to the Round of 16 for the first time in 12 years.

After the game, Korean captain Son said the team deserves to be praised but they will soon push the reset button and start fresh again to produce another miracle.

[Sound bite: S. Korean team captain Son Heung-min [Korean-English]]
“In the 2018 Russia World Cup, we did our best but we couldn’t achieve this kind of result. I am very happy that we got the result this time and am so proud of my teammates. Thanks to the cheers of Korean people, we gained the energy that allowed us to run one more step and play a good game.”

The Taegeuk Warriors now turn their attention to preparations for their first knockout round match against five-time winners Brazil, who finished atop their group with two wins and one loss.

In the match against the world-ranked number one side at Stadium 974 in Ras Abu Aboud on Monday, the South Koreans will be hoping that Brazil’s underwhelming scoring rate will keep Team Korea in the match as they look to repeat the success of 20 years ago on home soil, when Korea stunned footballing powerhouses to reach the semifinals and finish fourth.
Tom McCarthy, KBS World Radio News.
Share
Print
List