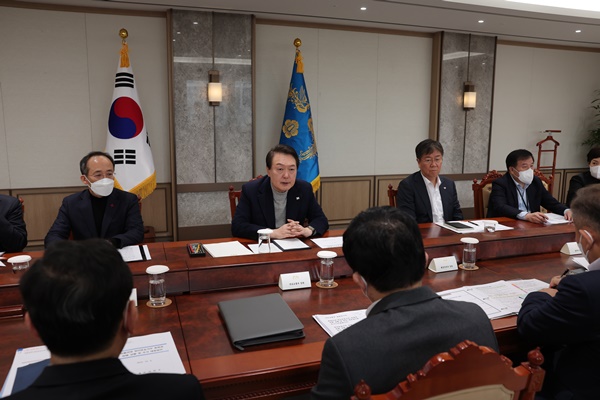 President Yoon Suk Yeol has instructed officials to prepare to immediately extend a return-to-work order for striking cargo truck drivers in other industries such as oil and steel.

Yoon made the instruction during a meeting with related ministers on Sunday, saying the truckers’ walkout in those fields are feared to cause additional damage to the economy.

He also called on officials to secure substitute drivers and utilize military personnel and vehicles to minimize the strike’s impact on the related industries.

The president’s instruction came days after a government order was invoked for cement truckers to immediately return to work.

The Cargo Truckers Solidarity launched the walkout 12 days ago demanding both an extension of and expansion of the Safe Trucking Freight System, a minimum wage guarantee which is set to expire at the end of the year.

The government has agreed to extend the system by three more years, but has refused to apply the system to a wider array of truck drivers.

During the Sunday meeting, the president reiterated his stern stance on what he calls an “illegal strike,” saying that not only the current collective refusal to transport but also the acts of disrupting, threatening or retaliating against transporting drivers amount to crimes.

He ordered the ministers to mobilize every administrative force available to track those involved in the strike and take swift and stern measures against them.

Regarding the plan by the umbrella labor union, the Korean Confederation of Trade Unions(KCTU), to go on a general strike on Tuesday in support of the truckers’ walkout, Yoon said it is not aimed at representing laborers’ rights and thus should be seen as a political strike.

He said taking hostage of the public’s livelihoods and the national economy at an economically difficult time will further threaten the survival of unorganized laborers and take away jobs from future generations and the public.
Share
Print
List