Gov't Checks Up on Truckers' Compliance with Return-to-Work Order 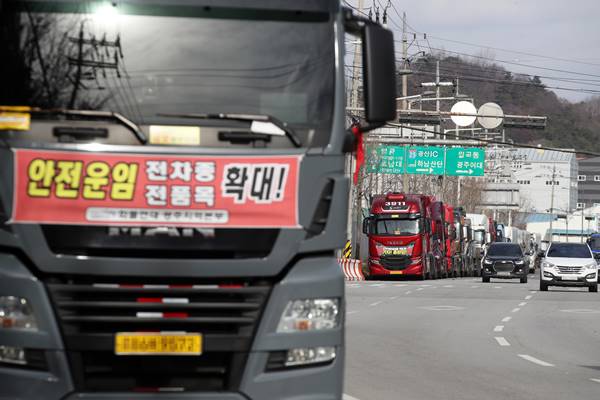 Anchor: As the unionized truckers' strike calling for improved working conditions continued into its 12th day, the government began confirming whether the truckers had begun to comply with a state order requiring them to return to work. The union, meanwhile, sought a review of the government order by the country's human rights watchdog.
Choi You Sun reports.

Report: The Ministry of Land, Infrastructure and Transport began an on-site inspection on Monday regarding the compliance by unionized truckers with a state order to return to work as their strike entered a 12th day.

The ministry's inspection centers on hundreds of truckers in the cement industry, whose deadline to resume working has passed following the issuance of return-to-work orders last Tuesday.

Their licenses, however, will not likely be revoked immediately as they will first be granted an opportunity to explain their actions.

As unionized construction workers launched a separate strike in support of the truckers, also on Monday, transport minister Won Hee-ryong inspected an apartment complex site in the southeastern port city of Busan where construction has been suspended.

Accusing the trucker union leadership of intentionally trying to halt operations at construction sites as more drivers complied with the return-to-work order over the weekend, the minister said the government will eradicate illegal acts.

The Fair Trade Commission also reattempted its on-site investigation of the Cargo Truckers Solidarity’s office in western Seoul for alleged violations of the antitrust law, three days after a first attempt failed in the face of resistance by union members.