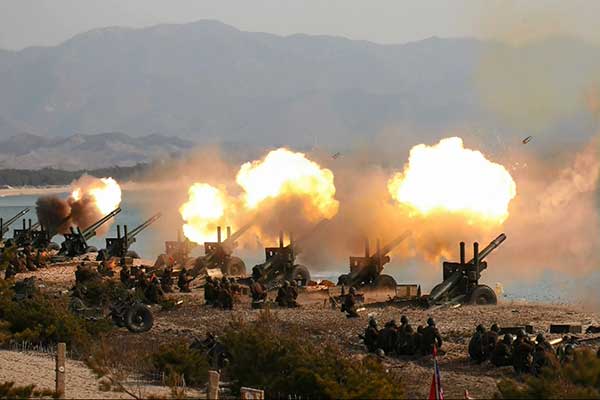 North Korea fired apparent artillery rounds into the inter-Korean military buffer zone in the East and West seas on Monday.

South Korea's Joint Chiefs of Staff (JCS) said it had detected the firing of around 130 projectiles presumed to come from multiple rocket launcher systems into the military buffer zones Monday afternoon. They were fired from an area in Kumgang County, Kangwon Province toward the East Sea and from Jangsan Cape in South Hwanghae Province toward the West Sea with the launches beginning at 2:59 p.m. according to the JCS.

The JCS said it immediately sent a warning message to the North for violating an inter-Korean military agreement and called for a halt to any further provocative actions.

The firing of projectiles into the buffer zones is a clear violation of the Sept. 19, 2018 military agreement, the JCS said, adding it was closely monitoring the related situation in close coordination with the U.S., and strengthening military preparedness.

The launches came about a month after the North fire some 80 projectiles into the military buffer zone in the East Sea, again from Kumgang County in Kangwon Province.
Share
Print
List