US Approves Possible Sale of Chinook Helicopters to S. Korea 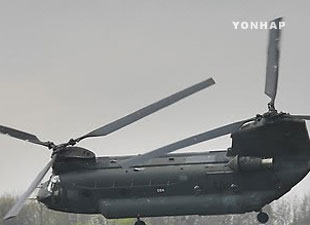 The Defense Security Cooperation Agency(DSCA) of the U.S. Department of Defense said in a statement on Tuesday that South Korea had requested to purchase 18 CH-47F Chinook transport helicopters, 42 engines and 44 secure communication units.

The DSCA confirmed that the State Department approved the potential Foreign Military Sale with an estimated value of one-point-five billion dollars, or two trillion won.

The agency said that the proposed sale will improve the South Korean Army’s capability to meet current and future threats by strengthening its “heavy lift” capacity.

It added that the CH-47F will allow the South to conduct missions in support of bilateral operational plans such as medical evacuations, search and rescue operations, parachute drops and disaster relief.