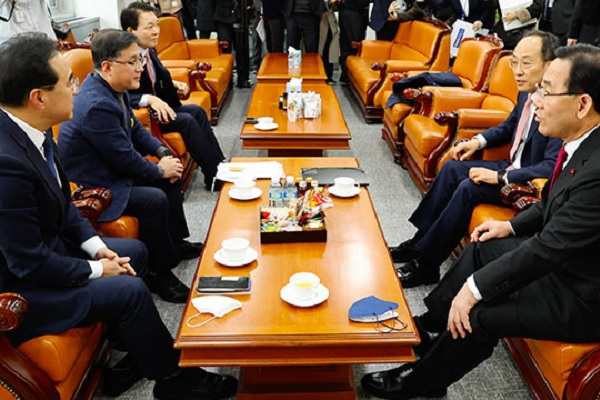 A National Assembly plenary session scheduled for 2 p.m. Friday did not open amid a partisan standoff over next year's budget bill.

Although the rival parties plan to continue negotiations, the two sides are far from reaching a compromise to begin the last regular session of the Assembly on Friday.

The floor leaders and policy chiefs of the ruling People Power Party and the main opposition Democratic Party began talks with finance minister Choo Kyung-ho earlier on Friday at the parliament building before moving to the office of Assembly speaker Kim Jin-pyo, where the deadlock persisted.

Even if they strike a deal later in the day, there may not be enough time in the session to pass the budget plan.

This year would mark the first time a budget plan has not been approved within the Assembly’s regular session since the Assembly Advancement Act entered into effect in 2014.
Share
Print
List