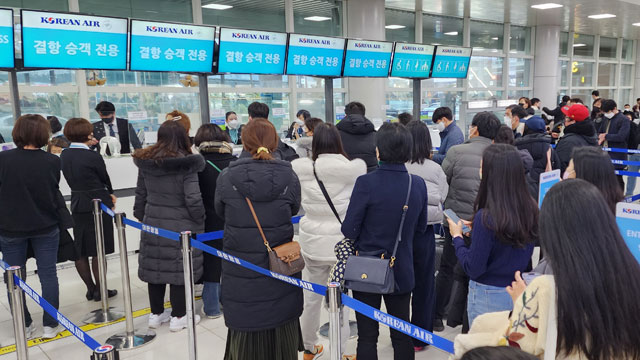 Korean Air has decided to cancel all its 88 flights scheduled for the day that connects Jeju to Gimpo, Busan, Cheongju and Gwangju.

Budget airline Jeju Air has also canceled 40 flights that were to depart or arrive in Jeju before 3 p.m.

According to the Jeju Regional Office of Aviation and the Korea Airports Corporation, 162, or 69 percent of the total 234 flights that were scheduled to leave Jeju International Airport on Tuesday will be suspended, affecting some 30-thousand passengers.

With Jeju airport expected to be crowded, people are advised to check their flight information through their airline before heading out to the airport.

Meanwhile snow has been falling in Jeju since Monday with 30 to 50 centimeters expected in mountainous areas and five to 20 in other regions by Wednesday afternoon.
Share
Print
List