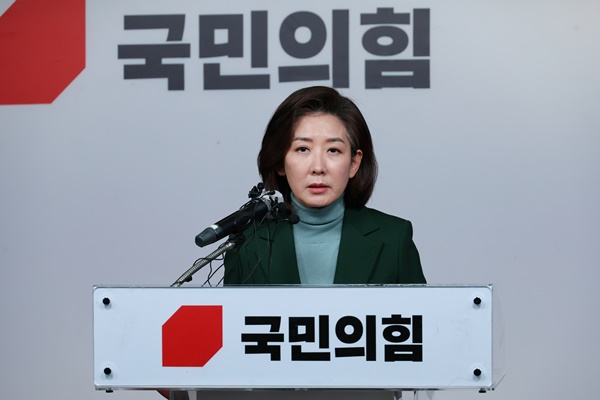 Former ruling People Power Party(PPP) lawmaker Na Kyung-won announced that she will not run for party leadership in March, following a public row with the presidential office.

At a press conference on Wednesday, Na said she will "courageously" put down the leadership bid if that could mitigate public concerns over an internal divide and confusion within the party and help bring harmony and unity.

Na's emphatic use of the word, "courageously," appears to highlight her willingness to embrace the decision's potentially negative impact on her political career.

The former floor leader said she plans to embark on a journey towards a new future and solidarity based on the spirit of sacrificing oneself for party interests and persevering for harmony.

Calling on the party to make use of the opportunity while in power to restore public livelihoods and correct constitutional order, Na wished for the success of the party and the Yoon Suk Yeol administration.

The four-term lawmaker, who was a leading potential contender, recently had a run-in with the top office, widely believed to support PPP Rep. Kim Gi-hyeon as the new party leader.

After rebuffing Na's policy proposal as the vice chair of the presidential population committee, the top office then fired her as both the committee vice chair and the climate ambassador.
Share
Print
List