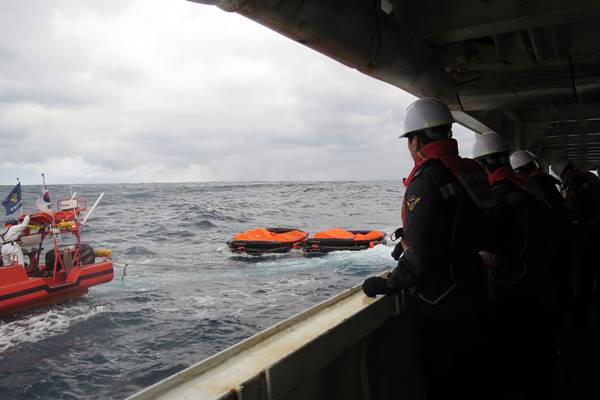 A foreign cargo ship carrying 22 crew members sank in waters off Jeju Island on Wednesday, with eight of them still missing.

According to the Coast Guard's Jeju branch, 14 out of 22 sailors aboard the Jin Tian wood freighter have been found so far while search efforts are ongoing for the remaining eight. Nine sailors out of the 14 rescued are reportedly unconscious.

The six-thousand-551-ton cargo carrier had 14 crew members from China and 8 from Myanmar on board. It sank in international waters some 148 kilometers southeast of Seogwipo on Jeju island.

The vessel transmitted its first manually operated distress signal via the Digital Selective Calling(DSC) system at around 1:45 a.m. Wednesday. About an hour later, the ship's captain notified the Coast Guard via satellite phone their intent to abandon the vessel.

Then, at around 3:07 a.m., the cargo ship sent a distress signal via the emergency position indicating radio beacon(EPIRB), which is normally activated after a ship sinks into water.

The Coast Guard, which is conducting a joint search and rescue operation with its Japanese counterpart, said the rescued sailors are expected to be transported to Japan's Nagasaki region.
Share
Print
List