S.Korean Destroyer to Dock at Benghazi on Wed. 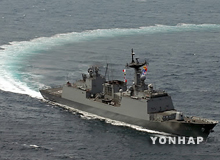 South Korea’s “Choi Young” naval destroyer is expected to dock at the Libyan city of Benghazi on Wednesday to assist in the evacuation of South Koreans in Libya.

The destroyer, which belongs to the Cheonghae Unit, arrived in Libyan waters on Tuesday and is waiting to get approval to enter a port in Benghazi. In the event it is denied port entry, the destroyer is considering using boats to transport the South Koreans in Libya to the ship.

Starting with Benghazi, the Choi Young will assist in the evacuations by entering ports in Sirte, Misurata and Tripoli.

The Foreign Ministry in Seoul estimated that there are some 380 South Koreans remaining in Libya. Of them, some 100 are expected to stay in the North African country.

The government has decided not to withdraw its embassy employees until the evacuations are completed.
Share
Print
List