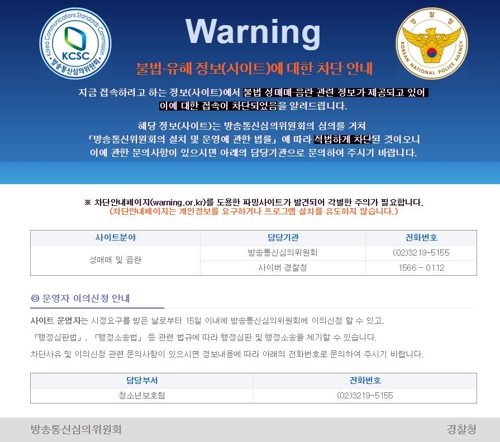 Anchor: Internet users in South Korea are questioning the government's newest online censorship method. The government’s so-called "https ban" uses a newly adopted technological solution to quickly check Web addresses entered into a browser before they are encrypted, a method some contend could enable the government to see what users type into their browsers. The government claims the technique will not lead to privacy violations.
Kim Bum-soo has more.

Report: The hypertext transfer protocol, commonly referred to as "http," allows the transfer of data from a web server to a browser.

Meanwhile, the "https" with an added “s,” meaning "secured," was developed to protect the exchanged data by encrypting it.

The technique was initially adopted for e-commerce transactions to ensure safer payments. The secure method, however, is also widespread in the configuration of illegal gambling and pornographic Web sites.

Instead of blocking individual URL addresses, the controversial “https ban" allows online regulators to review the Web address a user puts into his or her browser shortly before it is encrypted.

Critics argue that reviewing what an individual intends to encrypt could be in violation of privacy, and the government could monitor what content users have accessed online.

Though the Korea Communication Commission has denied the suspicions, the online censorship has already sparked public uproar.

However, less than a week after a complaint was filed on a Presidential Office Web site against the new censorship method, more than 200 thousand people endorsed the petition, requiring the top office to officially respond to it. By Tuesday afternoon, over 245-thousand had signed the petition.

Many web users are also criticizing authorities for limiting the freedom of adults to view the content of their choice.
Kim Bum-soo, KBS World Radio News.
Share
Print
List