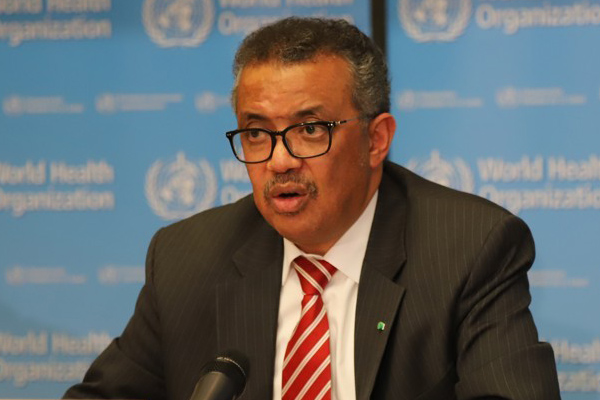 Anchor: The peak appears to have passed in South Korea's COVID-19 outbreak. But even as the country continues all-out efforts to contain infections, the World Health Organization warns the global tally will soon reach one million. South Korean Prime Minister Chung Sye-kyun says the country will maintain strict social distancing measures.
Our Kim Bum-soo has the latest tallies and predictions.

Report: The World Health Organization(WHO) says the total number of confirmed novel coronavirus infections will soon reach one million worldwide. A total of five percent of the cases are expected to be fatal.

[Sound bite: WHO Director-General Dr. Tedros Adhanom Ghebreyesus (English)]
“Over the past five weeks, we have witnessed a near exponential growth in the number of new cases, reaching almost every country, territory and area. The number of deaths has more than doubled in the past week. In the next few days we will reach one million confirmed cases, and 50-thousand deaths."

During his daily COVID-19 briefing on Wednesday, WHO Director-General Dr. Tedros Adhanom Ghebreyesus said the rapid global spread of the pandemic is deeply concerning.

[Sound bite: WHO Director-General Dr. Tedros Adhanom Ghebreyesus (English)]
"We recommend hand washing and physical distancing, but we also recognize this can be a practical challenge for those who lack access to clean water, or who live in cramped conditions. Together with UNICEF and the International Federation of the Red Cross, we’ve published new guidance for improving access to hand washing. The guidance recommends that countries set up hand-washing stations at the entrance to public buildings, offices, bus stops and train stations."

According to Johns Hopkins Coronavirus Resource Center, over 937-thousand-500 confirmed infections have been reported globally and more than 47-thousand-200 of the cases were fatal as of Thursday afternoon, Korea standard time.

The U.S. on Wednesday became the first nation with over 200-thousand coronavirus infections. Over 110-thousand-500 cases are reported in Italy, and over 82-thousand-390 in China although suspected underreporting suggests the figures might be higher.

In South Korea, an additional 89 people tested positive for the virus as of midnight Thursday, bringing the total number of cases to nine-thousand-976. Eighteen new cases involved overseas travelers who were confirmed upon arrival.

While tallies suggest the worst may be over for the country, South Korean Prime Minister Chung Sye-kyun noted during Thursday's central disaster headquarters meeting that now is not the time to ease social distancing measures.

[Sound bite: Prime Minister Chung Sye-kyun (Korean)]
"We are pondering until when we should maintain strong social distancing measures. We cannot delay the resumption of daily lives indefinitely as we are well aware of the public's fatigue. But as the global spread is sharply rising at an unprecedented rate while imported cases and cluster infections continue to be reported, easing social distancing measures risks reigniting a surge in infections."

The South Korean government on Wednesday imposed a mandatory two-week self-isolation requirement on anyone entering the country to prevent a new wave of infections from outside.
Kim Bum-soo, KBS World Radio News
Share
Print
List