Presidential Election Set for May 9th 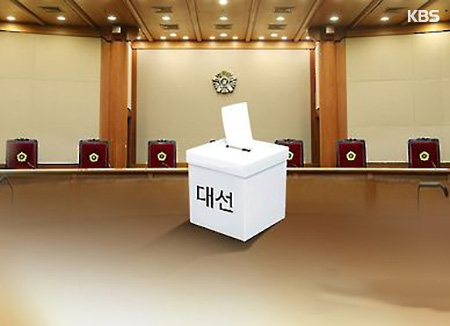 The government has officially set the upcoming presidential election for May ninth.

While fixing the date at an emergency Cabinet meeting Wednesday, Acting President and Prime Minister Hwang Kyo-ahn made it clear that he won't be running for the top post.

Explaining his decision not to run for the presidential election, Hwang said although he was aware of the voices calling for his candidacy, he concluded that he must not neglect his current role and national risk management.

He thanked his supporters for encouraging him to take “a bigger role,” but said he will instead exert his efforts on managing a fair election.

Since then, Hwang had emerged as a potential contender against former chairman Moon Jae-in of the major opposition Democratic Party. After former UN Secretary-General Ban Ki-moon decided not to run for the presidency last month, Hwang was considered as the standard-bearer for the country’s conservative political circle, which is reeling from the Choi Soon-sil scandal.

Hwang’s decision not to run in the presidential race has boosted the Democratic Party’s chance of producing the next president. Moon has maintained an overwhelming lead in the race to the top office, with two other members of the party, South Chungcheong Province Governor Ahn Hee-jung and Seongnam Mayor Lee Jae-myung trailing him. The former cochairman of the minor opposition People’s Party, Ahn Cheol-soo, is also behind in the polls.

As the election date has been fixed, the National Election Commission (NEC) is also stepping up its preparations for the election.

The NEC said presidential hopefuls should register as candidates beginning April 15th, and South Koreans living overseas will be able to vote between April 25th and April 30th.

Meanwhile, the government designated May ninth, which falls on Tuesday, as a temporary national holiday.