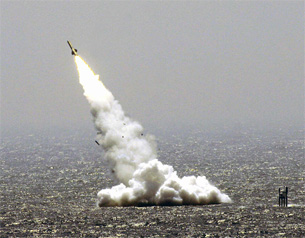 A missile is a weapon that is capable of high-velocity flight, using a self-propulsion device such as a jet engine. In modern usage, the term usually refers to guided missiles, or missiles that are able to modify their trajectory in mid-flight to accurately reach a target.

Guided missiles can be categorized according to the guidance system employed: remote or self-tracking. Generally, a missile consists of the propulsion device, guidance system, calibration/stabilization devices, explosives/detonators, and the missile body in which these devices are housed. Missiles that can reach targets 1,000~5,500km away are categorized as intermediate-range missiles, while those with an effective range of 500~1,000km are categorized as short-range missiles. (Definition: Intermediate-range Nuclear Forces (INF) Treaty, 1987). 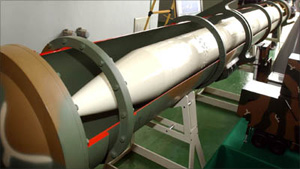 Therefore, a missile is a device that can carry weapons, usually bombs or explosives, and can guide or track itself during mid-flight to accurately hit a stationary or moving target. Accordingly, a discussion on nuclear capabilities has little meaning without a discussion on missile capabilities. That is, even a highly sophisticated nuclear bomb is rendered useless in the absence of a device to carry it accurately to its target. So the term ‘nuclear weapon’ usually refers to a missile equipped with a nuclear warhead. Missiles vary in their effective ranges: from close-range missiles for local warfare to ICBMs (intercontinental ballistic missile) that can strike targets located on the other side of the globe. Missiles can be launched from stationary launch pads, railroad cars, trucks, aircraft, warships, and even submarines. There are even portable missiles that can be carried and launched by individuals.

North Korea reportedly embarked on its missile development around 1969 when the former Soviet Union provided North Korea with surface-to-surface FROG (Free Rocket Over Ground) missiles with a range of 60 kilometers.

But North Korea is believed to have started missile development in earnest around 1976. It is said that North Korea supported Egypt during the 1973 Yom Kippur War and, in return, obtained the main body of the Scud-B missile and launch pad from the Soviet Union. North Korea is believed to have reverse-engineered them for the independent development of missiles. North Korea’s missile system is therefore based on the Scud missile. The country has continued increasing the missile range to develop the Scud-C missile, mid-range ballistic missile 'Rodong' and the multi-stage, mid-range ballistic missile ‘Taepodong’ one after another.

In the process, it is assumed that North Korea possessed a ballistic missile capable of reaching the U.S. mainland in the 2000s.

North Korea launched the long-range rocket “Unha-2” on April 5, 2009, to demonstrate in part its intercontinental ballistic missile capabilities. The technology needed to put the satellite “Kwangmyongsong-2” into space aboard this rocket can also be applied to the development of a ballistic missile. It was observed that the rocket flew 3,100 kilometers. (Some estimated that it flew 3,900 kilometers.)

In April 2012, North Korea again launched a long-range rocket, the “Unha-3.” The launch, which the country claims was to put the satellite “Kwangmyongsong-3” into orbit, ended in failure. Pyongyang attempted to launch the rocket once again in December the same year, and that was a success. Judging from this, North Korea is believed to have finished developing intercontinental ballistic missile technology for the moment.

This is the outdated Scud-B missile. It can be considered the progenitor of the DPRK’s missile system. It was developed starting in 1976 by disassembling and rebuilding missiles and launch pads provided by the USSR in exchange for Pyongyang’s support of Egypt during the 1973 Yom-Kippur War. The exact year its development was completed is uncertain. It is estimated that mass production and operational deployment of this missile started in 1985. The Scud-B is the starting-point of the DPRK’s missile program.

This is an improved (longer-range) version of the Scud-B. The longer range was achieved by increasing body length to accommodate 25% more fuel while reducing the total weight of the missile, including the weight of the warhead. The first successful test-launch was held in 1986. The estimated year of operational deployment is 1987, but estimates of the year its development was completed vary from 1988 to 1989. The DPRK has apparently exported the Scud-C and related technologies to Iran and Syria, leading to their acquisition of the missile. It is being exported to nations in the Middle East and Africa. At a price-per-unit of $4 million, it is a key source of foreign currency for the DPRK.

The ‘Rodong 1’, also known as ‘Scud-D’, was developed through an overall redesign and revamping of the Scud missile series. The name ‘Rodong’ was not officially given by the DPRK, but is a nickname of sorts used by the international community due to the fact that the missile was test-launched in the ‘Rodong’ village of South Hamgyung Province’s Hamju region. Its development is believed to have started at the same time as the Scud-C, and its existence was first confirmed through a U.S. satellite photo of the missile mounted on a launch pad in 1990 (though some claim that the correct date is 1989). It was test-launched successfully in May of 1993, when the missile landed in the East Sea after traveling a distance of 500km. Mass production of the ‘Rodong 1` is believed to have started in 1994, and it seems to have been placed in active service shortly thereafter. The DPRK’s missile program became an international issue because of the development of the ‘Rodong 1’. This is because its 1,000km range enables it to hit Tokyo, Japan as well as Taipei, Taiwan. The missile suffers from low accuracy, with a margin of error of about 2~4 km at maximum range. Its propulsion is believed to consist of four Scud rocket engines or additional combustion chambers, and its appearance is said to resemble those of the former USSR’s SS-N-4/R-13 or SS-N-5/R-21 SLBMs (Submarine Launched Ballistic Missile). It can be equipped with TNT as well as biological/chemical warheads. It is presumed that the DPRK received assistance in developing the ‘Rodong 1’ from scientists with the USSR’s Makayev SLBM program who designed the Scud missile.

This missile, also known as Scud-E, was also named after its test-launch site - Taepo village of North Hamgyung Province’s Myungchun region, Hago district (currently Musudanri village of the Hwadae region). The most noted point about this missile is that it is the first of the DPRK’s missiles to utilize multi-stage rocket propulsion, indicating that the DPRK’s missile capabilities have reached an entirely new level. The 1st stage rocket engine is that of the ‘Rodong 1’, while the 2nd stage rocket is that of the Scud-C. With the Taepodong, the DPRK acquired the capability to hit the U.S. mainland, a factor that has become a major concern in connection with its nuclear weapons program. On the 31st of August, 1998, the DPRK test-launched the missile without any prior notice, internationally confirming its existence. The 1st stage rocket landed in seas south of Vladivostok, while the 2nd stage rocket propelled the missile over Japan and into the Pacific Ocean at an altitude of 65km. This event profoundly shocked Japan, and has served as a justification for Tokyo to accelerate its adoption of a missile defense system. On the 4th of September, 1998, the DPRK announced that the projectile launched was in fact the satellite ‘Gwangmyung-sung 1’. However, there is no evidence to date that a DPRK satellite is in orbit, and there have been no transmissions between DPRK stations and any known satellite. Therefore, it is unlikely that the projectile launched was a satellite. Regardless of whether the projectile was a missile or satellite that failed to reach orbital altitudes, had it been equipped with a nuclear warhead, it would have been a de facto ICBM. This consideration alone is cause enough for the international community’s concern.

Concerns Over the NK’s Development of Missiles

Nations falling within range of North Korea’s missiles, such as Northeast and Southeast Asian nations (especially Japan), as well as China and Russia, perceive North Korea’s missiles as a major threat. With the recent confirmation of the existence of the ‘Taepodong’ missiles, a direct and more serious threat to the U.S. has also emerged.

Such security threats could give rise to an arms race in Northeast Asia. Already, Japan is actively adopting the TMD (Theatre Missile Defense) system in cooperation with the U.S. This could lead to increased military expenditures by China, which might then prompt Russia and Taiwan to take similar measures, eventually resulting in an arms race domino effect. It is only natural that North and South Korea would be caught up in such an arms race as well.

Proliferation of WMD (Weapons of Mass Destruction) due to Exported North Korea Missiles ?

For its prime source of foreign currency, North Korea relies on exporting missile bodies, parts, and related technologies for a variety of missiles ranging from Scuds to the ‘Rodong’ series. Buyer nations are usually located in the Middle East and Africa. However, as is the case in Northeast Asia, such nations that purchase missiles from North Korea could very likely spark a regional arms race with neighboring states.

North Korea and U.S. Objectives in the Development and Deterrence of Missiles

Apparently, North Korea’s persistence in its development of missiles stems from its hope to secure political stability and economic interests. Amid international concern, North Korea-U.S. talks on the missiles have taken place intermittently up to the present day.